Not every post will be about the Mahantango, today I want to show off a coral from the middle Devonian called Favosites turbinatus. This is an interesting coral that is known to form a smooth base in the sediment that often has a curve to it. I've been told two different stories from two different sources about how it received it's species name: turbinatus.

A few years ago I took a trip to Lousiville, KY and had the chance to collect from the Devonian aged Jeffersonville limestone (Eifelian). I found a couple of examples of this coral and they all looked like a helmet with a round surface on the bottom and eroded corallites on top. The locals call them Kneecap corals and I was told they were named turbinatus because they often flipped over during storms (turbulent storms). The specimen below came from my good friend Mike who runs the great blog Lousiville Fossils 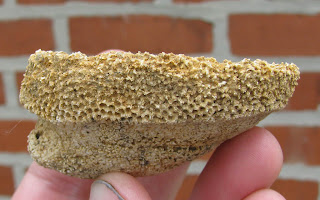 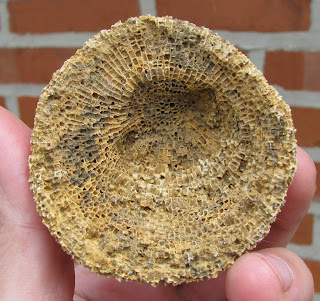 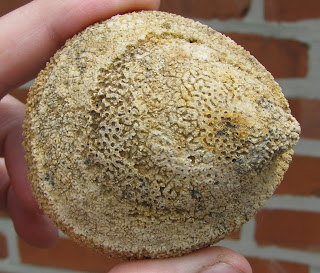 The second story came from a collecting companion while visiting Hungry Hollow near Arkona, Ontario in Canada. He told me that it was named due to the similarity of the appearance of the coral mound to a Turban. Here is an example from the Centerfield formation (Givetian) of New York that shows a much more mounded form: 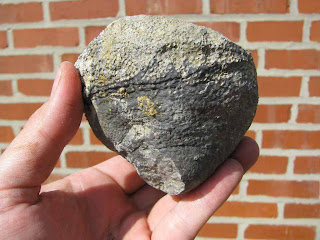 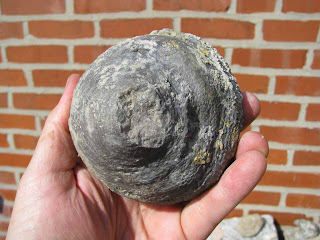 Now, both stories make sense when you look at them from the local perspective. In the Louisville area the fossils are often found as silicified fossils that have eroded from the limestone. Most times the corallites have a very gentle mound or have eroded some and so look like bowls. However, at Arkona the most commonly found specimens have the coral mound intact, are formed of Calcite and do look like turbans. I have been assured that the latter story comes straight from the researcher who named the species so I think I will go with that one as the official reasoning.

Here are some more pictures of other specimens:

From the Friends of UMMP Picture Archive: http://strata.geology.wisc.edu/mibasin/showfull.php?id=10