This is one of many exposures of the Mahantango formation in Pennsylvania. The site is a small borrow pit on the south side of route 147 north of the town of Dalmatia. 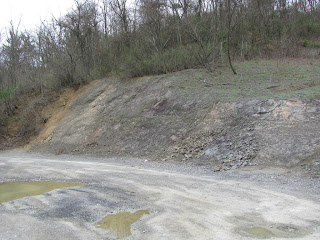 It's hard to tell from the photo but the rocks are steeply tilted and the layer surface is exposed along the length of the cut. As a result you only get one or two thin layers that are easily studied. This can be good and bad since it allows you a narrow view of a particular point in time. In this case a hash layer is the primary fossil producer here. A hash layer is one where a number of shells have collected into a small thin area and are very crowded together. This is usually indicative of a large violent storm like a hurricane or maybe a tsunami. The shell debris is washed together and often broken. You can find lots of different species but there are not many good fossils to be had since there was so much jumbling and compression. Below is a picture of a large pelecypod (possibly of the genus Leiopteria) that was exposed on the surface. Since it was parallel with the bedding plane the shell had been scoured out of it's buried position and deposited with other debris. 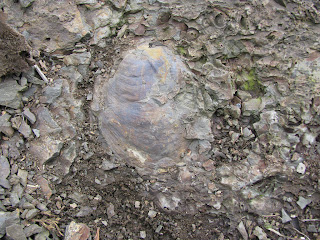 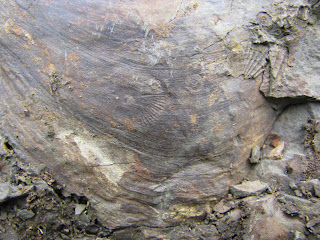 You can see other small fossils that surround and compose the matrix for the larger shell. There are lots of individual crinoid column segments and one of them was even compressed into the surface of the shell.
Posted by Dave at 12:01 AM