My previous post concerning Pleurodictyum was composed primarily of text I'd written a few months ago. Since then I've found another example of the genus that looks like the beginnings of a paper wasp nest. 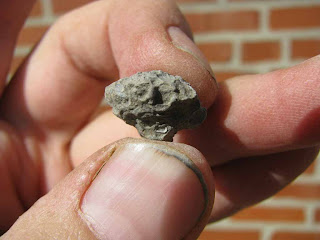 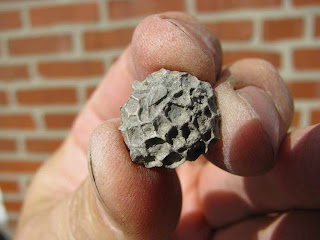 This was found in the Centerfield formation near East Bethany, NY during a recent trip. The fact that the genus colonizes shells or has a calcareous foundation seems to be indicative. Also, colonies are typically small and thus are probably not reef forming. Another important bit of info is that this specimen was found in limestone indicating a much cleaner water column in terms of sediment load. Since the specimens I've found previously have been in shale or mudstone it is obvious that the genus is wide ranging in it's habitat tolerance.

Also I found a few more pictures of other Pleurodictyum fossils

From the Falls of the Ohio web site: http://www.fallsoftheohio.org/PleurodictyumPix.html

From the Friends of the UMMP picture archive: http://strata.geology.wisc.edu/mibasin/showfull.php?id=1068
Posted by Dave at 12:01 AM