I thought I'd start my blog with a post on a favorite fossil coral: Pleurodictyum found in the Mahantango formation (Middle Devonian/Givetian, 385 Ma). This is a tabulate coral of the Favositida Order whose members can be found in rocks from the late Silurian (422.9 Ma) to the middle Mississippian (342.8 Ma).(*1) I've been collecting a lot of fossils of this genus from the Sherman Ridge (Upper Frame Shale) member of the Mahantango Fm. (*2, *3) and have formulated some observations. For the purposes of this post I've named the species of the corals based on illustrations and pictures of similar specimens. It's impossible to truly nail down the species name without examining the fossil much closer.

The specimens I find occur in two distinct types: 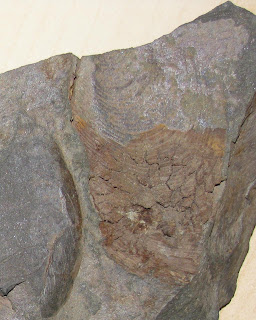 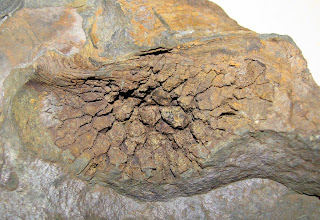 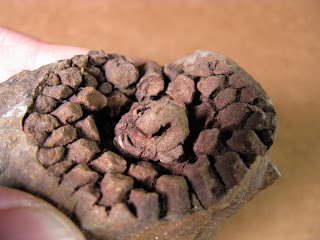 2. Colonies that formed on the floor of the ocean without any obvious external foundation (Pleurodictyum lenticulare (or possibly americanum)) 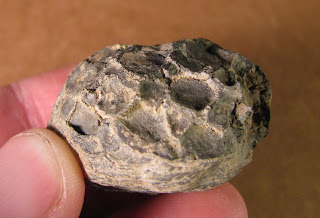 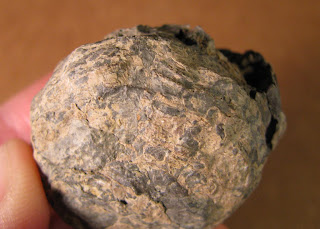 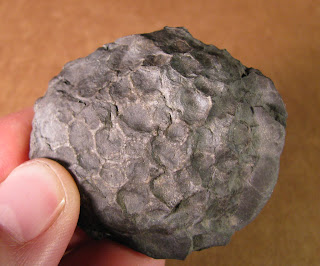 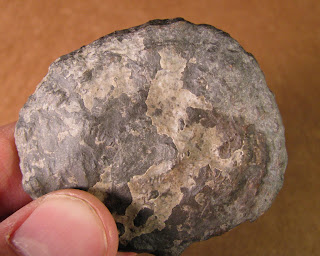 What I find interesting is that the two species are found in different rocks within the formation. I've found P. lenticulare only in a fine grained, dark grey shale that weathers light gray and often breaks into needle like fragments during weathering while P. styloporum has only been found in the thick bedded light grey siltstones that weathers brown and lay above the dark grey shale.

The P. styloporum fossils are found as casts where the mud has filled the hollow spaces of the animal after it died. This is the result of the animal being buried and fossilized as per normal but at some point the calcite based skeleton was dissolved away leaving only the siltstone cast. One of the benefits of this process is that you are able to see the underside of the colony where it was attached to the shell and the internal details of the animals living space. In the two examples above you can see one colony grew on a worm tube and the other looks like it grew on a Modiomorpha Pelecypod. The latter mode is much more common in the thick mudstones found at Seven Stars, Pennsylvania where I've found many pelecypod shells encrusted with Pleurodictyum colonies. This is a common growth pattern seen in other corals of the period such as the Aulopora colonies that are common on the Paraspirifer et. al. brachiopods found in the Silica Shale.

The P. lenticulare fossils are found as calcite casts with the hollow areas filled with shale. There is little to no evidence of the deeper weathering associated with the siltstones found above them so the overall structure and growth habit of the colony is preserved. For some reason these colonies had no trouble growing on the muddy bottom where they established colonies without a shell or other obvious foundation to start on. I've most often found these in the dark grey shale where there is also very little evidence of large species of Pelecypod.

I have never found Pleurodictyum fossils in association with other Tabulate corals or Rugose coral species.

So what have I learned so far?

- I know that when looking at the stratigraphy there are two slightly different paleoenvironments that the fossil colonies lived in.
- P. lenticulare formed without the benefit of a solid foundation and that tells me that the substrate was firmer and thus they could establish colonies on the surface of the mud. If the substrate was firm then there must not have been much water movement and could indicate a sheltered lagoon or deeper water.
- P. styloporum formed on shells of large exposed Pelecypods or worm tubes which may indicate that the shells were washed in rather than formed in-situ. This in turn could indicate a more turbulent environment which may mean it was closer to the shore line or a breakwater.

As I've been reading about the Mahantango formation I've learned that it formed as a series of fining sediments that graded upwards until the cycle would repeat itself again.(*2) This means that the base of a series would be sandstone and the sediment particles would get smaller and smaller as time wore one so that it would grade into a finer sandstone, then shale, then silt and mudstone before going back into a sandstone. This represents an actively changing environment with rapid deposition which is the result of the erosion of the mountains formed during the Allegheny Orogeny (mountain building event) to the southeast. It also records episodes of transgression and regression of the ocean which covered much of Pennsylvania at the time. As the sea rose, it would drown river deltas and thus the sediments that were deposited would become finer and finer until the sea level dropped again. The mechanism for the sea rising and falling could be due to ice ages or regional deformation as the Allegheny Orogeny continued.

It's hard to come to any firm conclusions as I'm not an expert in understanding how the geology and stratigraphy of the rocks relates to the paleoenvironment. Also, my sample size is somewhat small with only two specimens of P. lenticulare and a handful of P. styloporum specimens in my collection. What I think I'm observing is a limited window in time that illustrates how species growth habits change as the environment does.

I'm still unsure as to what drove the coral to decide where to grow. This site, ( http://www.fossilguy.com/sites/18mile/18_col.htm#coral )which has pictures of P. americanum, clearly shows both colonial habits occuring in the same formation (in this case the Moscow Formation which is contemporary with the Mahantango Fm.). Is it environmental or just happenstance? I can see why a polyp would want to colonize an existing shell as, to me, it seems more stable; but does this give it more of an advantage over those who colonize the substrate?


Here are some links to other photos of similar Pleurodictyum specimens around the world:

From the Kentucky Geological Survey: http://www.uky.edu/KGS/fossils/tabulatemound2.htm

From the Museum Victoria in Australia: http://museumvictoria.com.au/prehistoric/time/corals.html