Small sponge from the Widder formation

On a trip to the exposures of the Widder formation along the Credit river in Hungry Hollow, Ontario, I found this cluster of sponge spicules. It is not uncommon to find individual spicules like this within the Hungry Hollow member of the Widder formation, but a large cluster like this is less common. I checked the "Check List of Fossil Invertebrates Described from the Middle Devonian Rocks of the Thedford-Arkona Region of Southwestern Ontario" by Stumm and Wright (1958) and they list one sponge known from the Widder formation: Astraeospongia hamiltonensis.  I am familiar with that genus from the upper Silurian where it is known as Astraeospongia meniscus from the Brownsport formation. The spicules in my specimen look very similar to those earlier species so I think I will stick with the name Astraeospongia hamiltonensis. 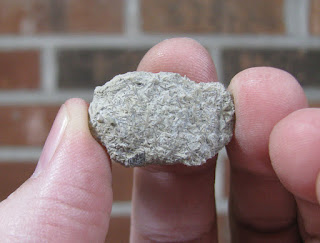 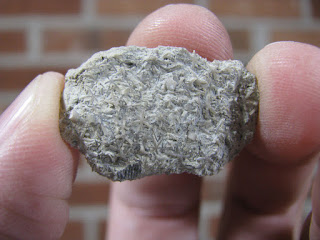 I collected this specimen from the Hungry Hollow member of the Widder formation which is Devonian in age, Givetian stage.