Below are some pictures of a piece of Favosites coral that shows some interesting growth patterns.

From the top you see the typical honeycomb like arrangement of the corralites. 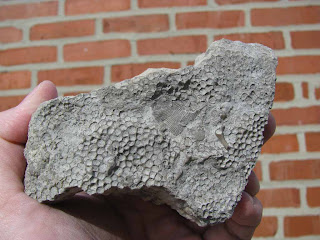 A cross section view shows long, continuous corallite growth. The white areas are Calcite while the orange areas are Dolomite. 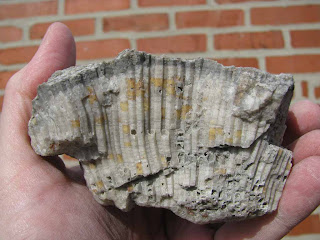 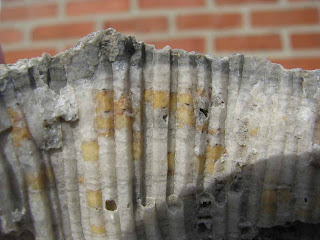 The bottom reveals a wrinkled looking surface that is indicative of the colony growing over sediment. 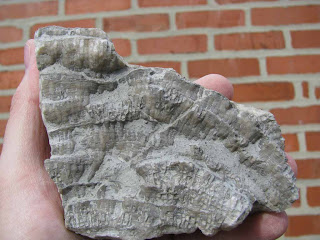 Here is the most interesting part to me. When you view a cross section of the colony on edge you can see how new area was added. 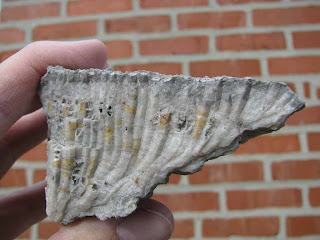 Here is how I interpret this piece: A new corallite would bud off  and as it starts to grow, other buds form between it and the main colony which forces it to grow outward a little further. Eventually the growth of that corallite and the others stabilizes and they grow more vertically as part of the main colony. The process repeats itself and also reflects the relative surface of the sediments that surround the colony. At some point the influx of new sediment is greater than the speed of growth of the colony or maybe it suffers some other sort of calamity like anoxia which kills the corallites or gets buried by a storm.

I found this piece of Favosites coral near Arkona, Canada. It came from the Hungry Hollow member of the Widder formation which is middle Devoian (Givetian) in age.
Posted by Dave at 12:01 AM