Many years ago I exchanged fossils with another collector in Spain. Some of the fossils he sent were from Tenerife Island which is part of the Canary Islands. One of the more interesting fossils was one of a "fossil wasp nest". 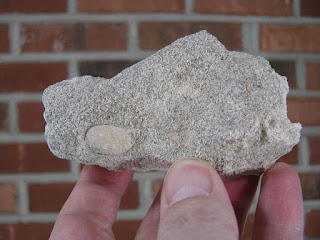 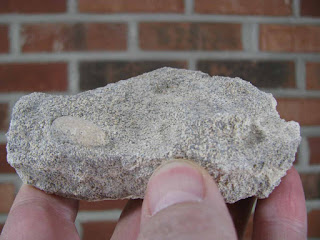 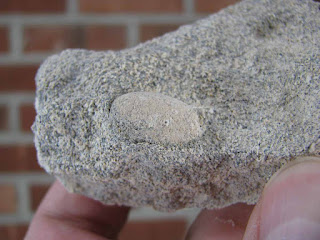 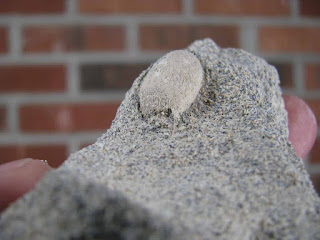 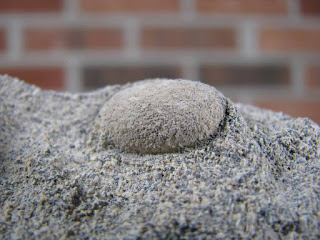 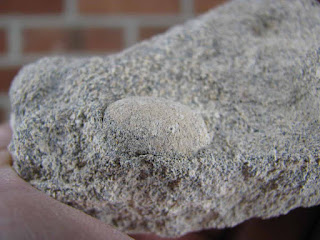 I was dubious of the provenance of the specimen and it remained in a box until January of 2020 when I saw someone post a similar fossil on the Fossil Forum.

It was then that I did some digging and found a paper online that explains these fossils: "Fossil bee cells from the Canary Islands. Ichnotaxonomy, palaeobiology and palaeoenvironments of Palmiraichnus castellanosi", La Roche Brier, Francisco & Genise, Jorge & Castillo, Carolina & Quesada, María & García-Gotera, Cristo & Nuez, Julio. (2014).  Palaeogeography, Palaeoclimatology, Palaeoecology. 409: 249–264.  DOI: 10.1016/j.palaeo.2014.05.012

Here is a quote from the paper

6. Conclusions
1) Fossil bee cells, attributable to the ichnospecies Palmiraichnus castellanosi, are recorded from the Pleistocene and Holocene of the easternmost Canary Islands. They are single cells with ovoid to
subcylindrical shape and a discrete wall covering a chamber and an antechamber. The chamber is internally polished and is sealed by a spiral closure. The antechamber, with smooth internal walls, has a structureless active filling of the same material from the palaeosol. This record constitutes the first documented evidence for bees, and Hymenoptera, in the Quaternary of the Canaries and the first one of this ichnospecies in Africa.

2) Specimens of Palmiraichnus castellanosi are similar to extant cells of Andrena savignyi studied herein, regarding shape, and the presence of a discrete wall, spiral closure and antechamber. This indicates that the members of the genus Andrena (Andrenidae) were the trace makers of P. castellanosi in the Canary Islands.

3) The high percentage (95%) of open cells indicate a high level of breeding success, favoured by the lack of predators or parasites and optimal environmental conditions, at least in the Pleistocene.

4) Palaeoecological and statistical data suggest that five species may have produced Palmiraichnus castellanosi in the Canary Islands. One on Lanzarote in the Holocene, another in south Fuerteventura in the Upper Pleistocene, two on Gran Canaria during theMiddle Pleistocene (one on the north coast and the second in the east) and the last on Montaña Clara, also in the Middle Pleistocene.

5) The abundance in the Pleistocene of Palmiraichnus castellanosi in the lowlands, reflecting a large number of individuals and species of Andrena, suggests a rich flora with probably many endemic shrubby species in accordance with present and other palaeobotanical and palaeoanthropological evidences.

6) The favourable climate attested by high densities of Palmiraichnus castellanosi associated with helicids may have been similar to thatprevalent at present in the lowlands of the Canaries, but probably
with a higher MAP.

7) The land-snail assemblage associated with the low densities of Palmiraichnus castellanosi in the Holocene at mid-altitude suggests a cool moist palaeoenvironment, with lower temperatures than in
the Pleistocene lowlands,more favourable for the success of the beetle producers of Rebuffoichnus than for bees producing P. castellanosi.

Some pictures from the paper: 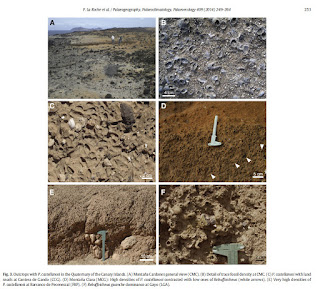 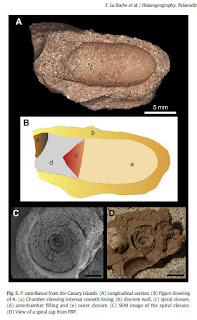 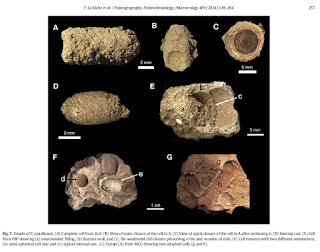 While I am not 100% sure the fossil I have is one of these "Bee cells" that the paper describes, it certainly looks similar.  If nothing else I at least learned a bit more about fossilization processes and paleoclimates by reading the paper.