Strophonella bransoni brachiopod from the Bois d'Arc formation of Oklahoma

Another flat brachiopod from the class Strophomenata that can be found in the Bois d'Arc formation is Strophonella bransoni. It has a rounded to subrectangular shape with a (notably) convex brachial valve and concave pedicle valve. The surface of the valves have many thin costellae decorating it, which stand out in relief somewhat, and on some specimens very fine concentric growth lines can be seen. Amsden's original description for the species indicates that the pedicle valve has a small beak that extends past the hinge line but none of the specimens I found have that portion visible enough for me to confirm. Strophonella bransoni can be distinguished from Stropheodonta gibbera by the smaller degree of convexity to the shell and the stronger, more rounded costellae. 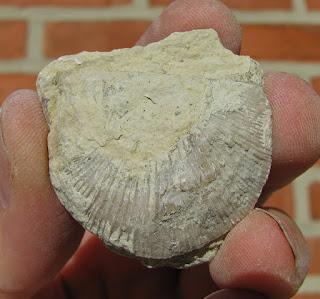 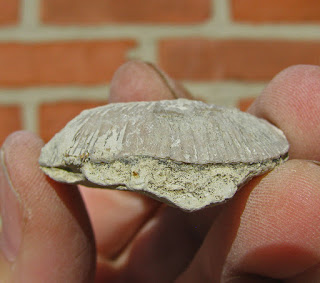 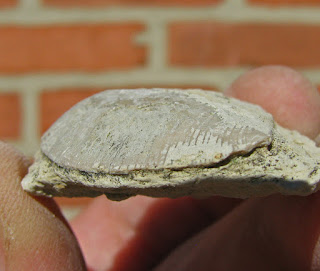 Unfortunately this, and other, specimens that I found do not have either the hinge line (posterior) nor pedicle valve exposed enough to view and photograph adequately.

Specimen #2 - This specimen is more intriguing for the epibionts that decorate the shell. 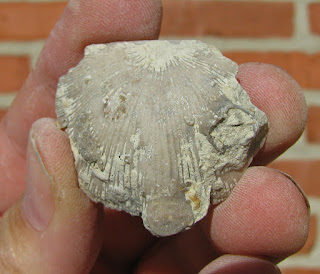 This appears to be a holdfast of some sort, possibly from an Edriocrinus sp.? 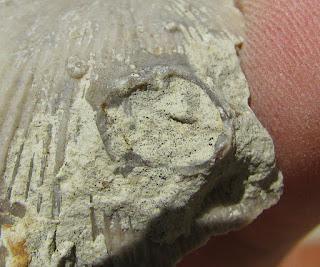 I believe these next two pictures are of an inarticulate brachiopod valve that is cemented to the shell surface. Based on appearance, it could be a species of Petrocrania (which often have nondescript surfaces that often mimic the shells they have colonized as in this example). 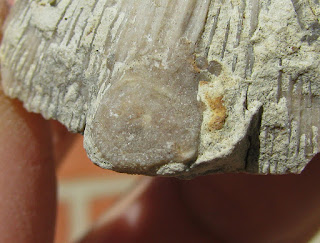 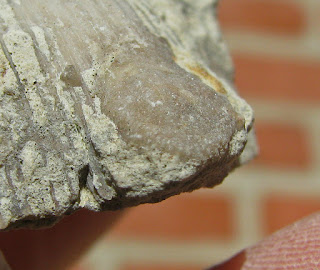 A bryozoan also used the shell as a hard substrate.Perhaps a species of Lichenalia? 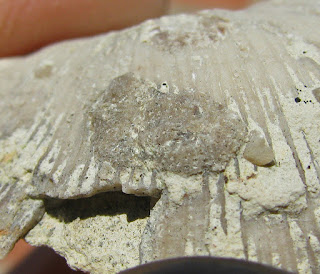 And finally a Spirobis sp. worm tube which looks like a tiny gastropod. 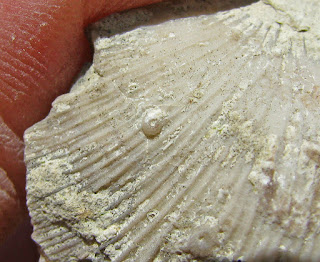 I found the specimen shown on this page in the Bois d'Arc formation (Cravatt member) near Clarita, OK which is Devonian in age (Lockhovian stage). The Bois d'Arc overlies the Haragan formation but both are the same age (Devonian, Lockhovian stage). They are both roughly correlative to the Helderberg fauna of New York and thus are contemporaneous with the Coyemans, Kalkberg and New Scotland formations.