The horn coral Streptelasma (Enterolasma) strictum is very commonly found in the Kalkberg formation of New York. It's rugose, or horn, coral that is generally found as small, straight cone shaped fossils often with linear striations along the sides. Most are either crushed or have the calice (the cup like area where the animal lived) infilled with matrix and so the septa are not readily visible. Here are three specimens that I collected from the same road cut that show a variety of sizes. The middle specimen was crushed at some point in the past either before or during the compression of the mud it was buried it to form the limestone rock it eroded from. 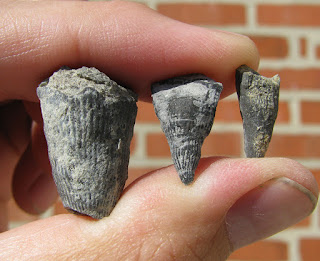 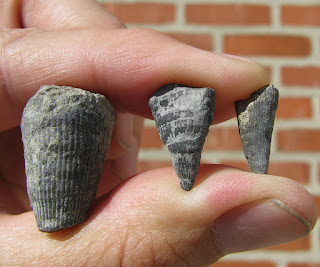 These specimens come from the Kalkberg formation which is Devonian in age (Lockhovian to Pragian stage) and were found at a roadcut near Schoharie, NY.
Posted by Dave at 12:01 AM