Rhytistrophia beckii brachiopod from the Kalkberg formation of New York

Another tough fossil brachiopod for me to identify is the one shown below. At first it looked like a Leptanea sp. but the shell is not rectangular enough. Then I thought it might be a Strophomena sp. but I've not seen one that has the "corrugated" surface. Finally I settled on Rhytistrophia beckii after reading the description in Karl Wilson's book "Field Guide to the Devonian Fossils of New York" on page 79:


A search of the name Rhytistrophia beckii on the Fossilworks.org website, lists the name as one of several "alternative combinations" along with Leptostrophia beckii and Strophomena (Strophodonta) beckii. In Hall's 1861 "Paleontology of New York" Vol 3 (pg. 191, fig. 22) it is known as Strophodonta beckii.

The shell is embedded in the matrix still so I'm not sure if it's a single valve or has both. The white mark is some damage the fossil took when it tumbled down the cliff face. 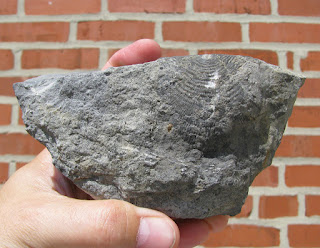 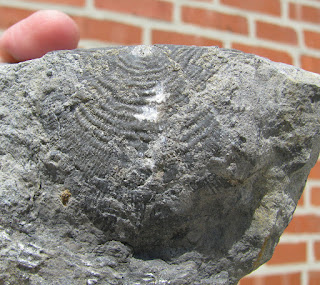 An attempt at an anterior view of the fossil This is the hinge line which is visible on the very back edge of the rock. 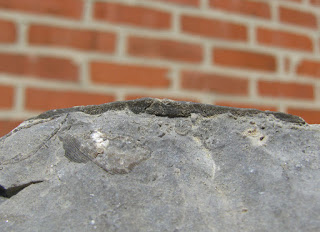 This fossil was collected from the Kalkberg formation (Devonian, Pragian to Lockhovian stage) near Schoharie, New York.
Posted by Dave at 12:01 AM