Favosites sphaericus coral from the Kalkberg formation of New York

According to Hall's "Paleontology of New York", Volume 6, pg. 9, pl. VII, fig. 1-12, the specimen below may be Favosites sphaericus. It has very small cells, similar to a bryozoan, but forms hemispherical mound shape and has an epitheca. Here is Hall's original description:


Corallum massive, variable in form. Cell tubes polygonal, generally hexagonal;length from 2 to 13 mm. or more; diameter from .25 to .35 mm. On the surface are frequent maculae .5 mm. in diameter, where the cells are larger than the others. Cell walls thin ; smooth or with transverse wrinkles or striae, which sometimes form indistinct nodes at the angles. Septa strong; sometimes distant from each other; at other times quite closely arranged. Mural pores minute, comparatively distant, a single series on each face ,of the tube.

Then he follows that paragraph with the following:


This species is very variable in its mode of growth, sometimes occurring in branching forms, with the cell tubes commencing at the centre and gradually curving upward and outward to the surface; others are in hemispherical masses, with a flat base, the tubes radiating from the base to the surface; increasing by interstitial or lateral additions; sometimes in masses formed of
successive layers, as if by interruptions in growth. It is also found encrusting crinoid stems and other objects, especially the basal portion of Lepadocrinus, occurring sometimes in layers of not more than 2 mm. in thickness.

After reading that it seems that Hall had some difficulty separating this species from possible bryozoan species, especially when he mentions "cell tubes commencing at the centre and gradually curving upward and outward to the surface". The specimen that I have tentatively identified as F. sphaericus is somewhat weathered and some detail is either missing or obscured by matrix. In general, it has been my experience that small celled masses belonged to Bryozoans while larger celled masses were coral. Without sufficient preservation I can't tell if there are monticules present (which would indicate it is a bryozoan) nor can I examine it in enough detail to look for septa (which would indicate it is indeed a coral). So for now I am sticking with the tentative ID. 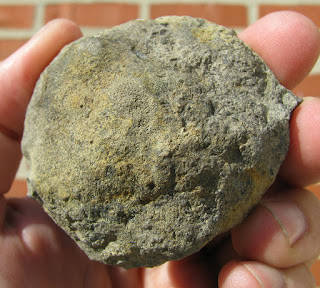 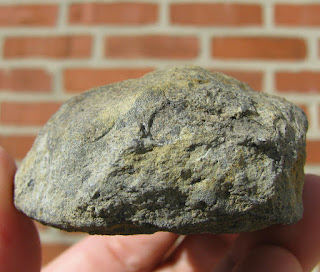 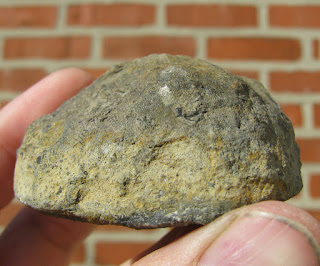 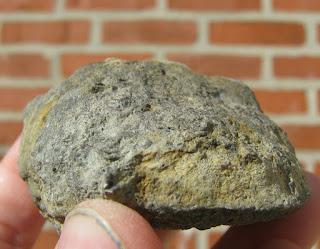 Ventral surface with the epitheca. 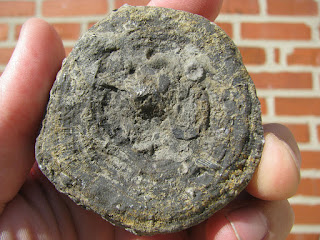