I have a fascination with the group of Pelecypods known as Rudists. These were clams that had really robust shells and could form reef like clusters. Some had one valve cemented to the sea floor with the other being merely an operculum while others have coiled shells like Gastropods or Ammonites. Diceras arietinum is the latter type of rudist. It had two valves that were about equal in size and shape but they had a slight spiral twist to them. In older specimens the umbo or beak portion (this is usually the rounded area at the top of a clam valve) look like snail shells.

A quick search of Google Images yields many good examples both real and artistic.

Recently my friend Christian sent me a specimen from the Jurassic (Upper Kimmeridgian stage) near Plagne, France. It's a little rough but you can see some of the anatomical features that help to ID it.

This is a shot looking at the meet point between the valves. I think the line that is present is the actual edge of the valves. 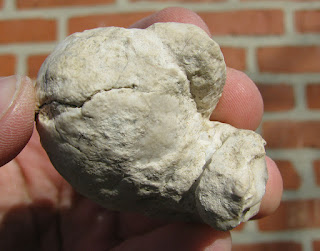 In this series of pictures I'm rotating the specimen along the valve meet line about 120 degrees each time. 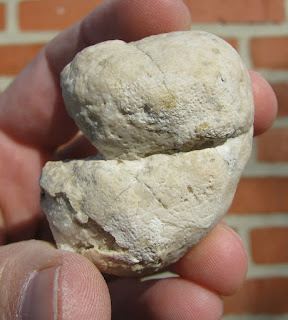 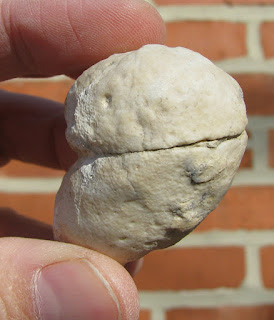 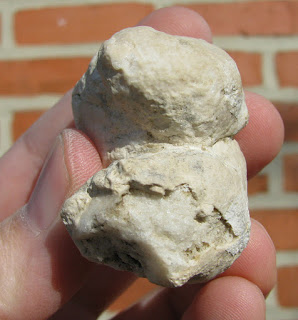 Now you are looking at one of the valves from the umbo. It's a little weathered but you can see the spiral nature. 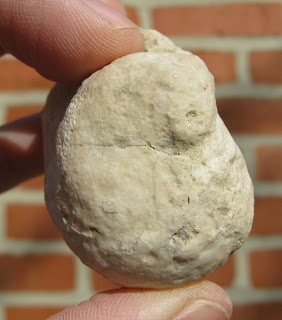 And here is the other valve. 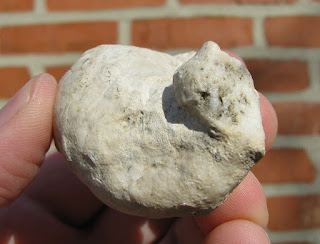 Viewing the valves from the umbo perspective reminds me of the oyster Exogyra as in this specimen or this one.

I've written about other rudists like Laperousia crateriformis and Radiolites trigeri before. If you can read French there is a nice paper here that discusses Rudists, more specifically the genera Hippurites.
Posted by Dave at 10:03 AM