Stuff found on the undersides of Microcyclus from Arkona

Microcyclus sp. are solitary corals that lived on the muddy bottoms of the Devonian sea 389mya and were preserved as part of the Arkona formation. The seafloor that they lived in was only periodically oxygenated enough for life to sustain itself and so Microcyclus is found primarily in a thin horizon within the formation. Since the seafloor was soft and muddy the corals needed some hard surface to attach to as polyps in order to grow, otherwise they would be smothered by the sediment.

This Microcyclus grew on a small Chonetes sp. brachiopod shell. 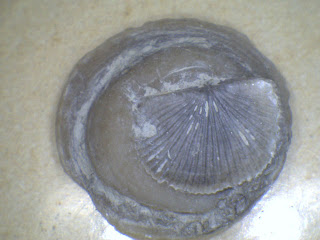 This specimen grew on a Tentaculites or Crinoid stem. 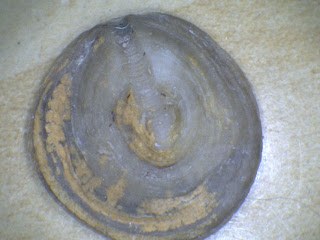 Ostracods are sometimes found under the bases. This one was along the edge of the Microcyclus and so was likely not the initial attachment point for the base. I think this might be Ponderodictya punctulifera. 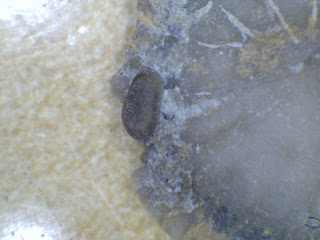 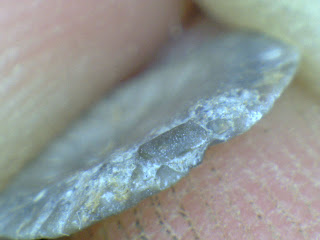 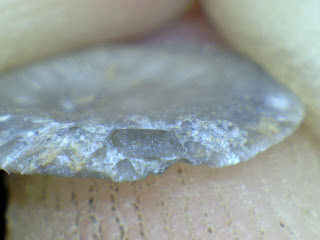 Here is another species of Ostracod, called Dizygopleura trisinuata but again it was not the initial germination spot and may be just a piece of debris that got caught under the coral as it grew. 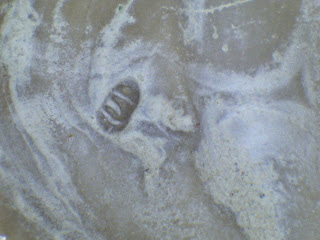 Finally we see this coral that grew on an accumulation of Ostracod and other shelly debris. 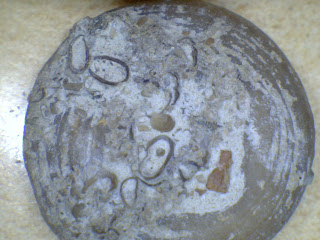 My ID's for the above Ostracods are based on the book "Ostracods of the Middle Devonian Silica Formation" by Robert V. Kesling and Ruth B. Chilman, 1978, Papers on Paleontology No. 18, University of Michigan Museum of Paleontology.

All the above specimens came from the Arkona formation (Devonian, Givetian stage) near Arkona, Ontario, Canada. They came from a particular horizon that a friend of mine (Darrell) pointed out to me. Thanks to his tip I found four dozen different specimens of Microcyclus including those pictured above.
Posted by Dave at 12:01 AM