This is a partial shell of a very large brachiopod called Macropleura macropleura . I'm not positive but I think this is the pedicle valve due to the large muscle scars and structures. The shell is large but it's also fragile so while I found many pieces, this was the most complete. 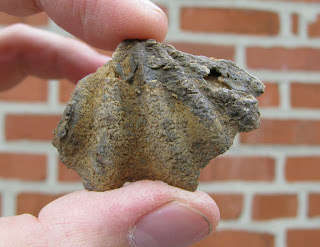 Interior of the shell 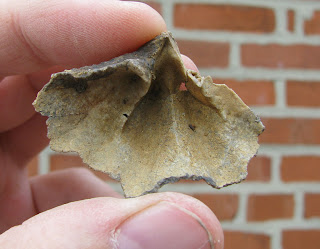 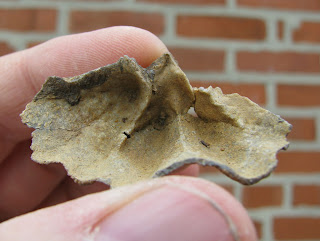 The above specimen came from a roadcut along US route 220 in Highland county, Virginia. The cut is listed as site #16 in the book "Fossil Collecting in the Mid-Atlantic States" by Jasper Burns. The Licking Creek formation is equivalent to the Shriver Chert member of the Old Port formation in Pennsylvania and the Birdsong formation in Tennessee which means that the fossils are part of the Helderbergian fauna.

Here are some similar fossils that are in the Yale Peabody Museum: Specimen #1 Specimen #2
Posted by Dave at 12:01 AM