While visiting 18 mile creek south of Buffalo, NY I've found some thin slabs of limestone from the Genesse formation which are from a layer called the North Evans Limestone. The layer has been interpreted as a lag bed resulting from concentration of eroded material from Hamilton group and Genesse formation rocks. It only occurs in western New York in Erie county over a limited area. The the deposit is right at the boundary between the middle and upper Devonian (Givetian to Frasnian stages).

I was attracted by reports that I'd read indicating that fossilized wood could be found in this layer somewhat frequently. So far I have found several piece of small logs or branches that are carbonized and partially replaced by pyrite. It's fairly easy to spot pieces of limestone that have the wood within as you will see red streaks where the pyrite is weathering away.

This is a typical piece with a small branch. 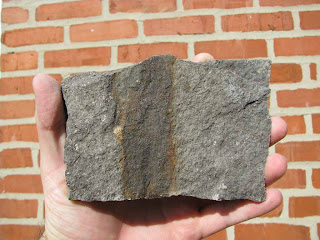 A closeup reveals a cracked or crazed appearance similar to how some pottery glazes look. The white "veins" are calcite that has filled in the space. 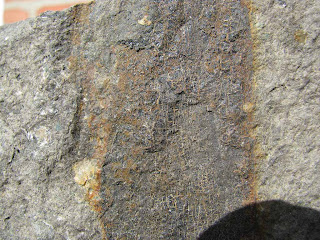 This is a larger piece and even shows some minor coal. 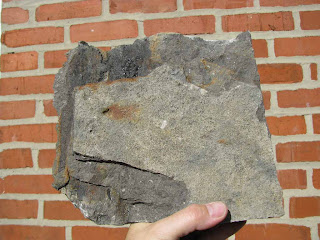 A closeup of the coal. 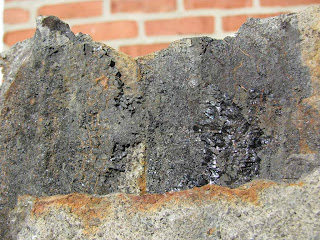 I've found the best way to expose the wood is to try and split the slab of limestone where you see the red pyrite streaks. In the next post I'll show you some of the micro fossils that can be found in the limestone.
Posted by Dave at 12:01 AM