When collecting in the field often one finds many loose fragments of larger, and more delicate, fossils. Among the most commonly found are Crinoids (stems, calyx pieces), Bryozoans (thin branches or lace like fronds) and branching or "finger" corals. On a trip to Arkona, Canada I managed to collect a number of fragments of a branching type coral and have subsequently reassembled them. 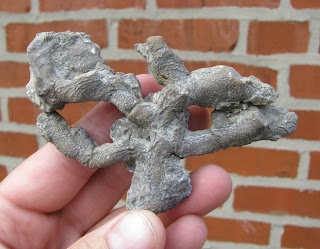 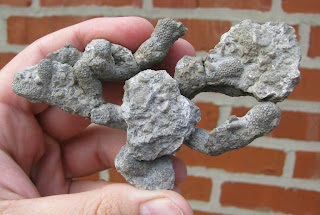 It's a rough composition but not too bad. Some pieces were still part of a larger rock and I broke them out so the finished piece would be more complete. It looks like this may be a species of Favosites coral but I'm not sure which. The specimen comes from the Hungry Hollow member of the Widder formation which is Middle Devonian in age. 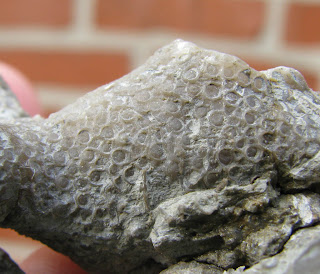 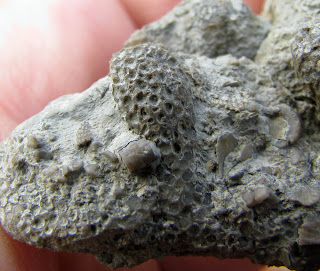 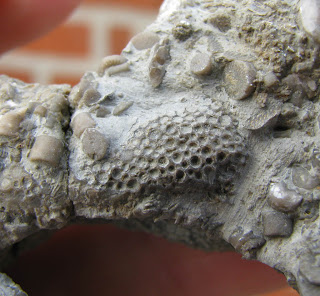 There are some interesting things that can be noticed by studying the reassembled specimen. It is fairly flattened, possibly by compression, but it once did stand upright in on the sea floor. This is evidenced by the fact that there are corallites on all sides of the branches. There doesn't seem to be any regular pattern to the growth of the branches as they twist and turn randomly and in some cases come fairly close to touching. I don't see evidence of epibonts or predation so I'd say the burial was during a storm that probably smothered the polyps.

One day I hope to clean all the remaining rock off of the pieces so that it will look more like the way it once did. I was inspired to do this by my love of puzzles and by my friend Joe who has done similar projects for a Cladopora coral from Arkona.
Posted by Dave at 12:01 AM