This past April I took a trip through Virginia and West Virginia exploring some sites that were listed in the book "Fossil Collecting in the Mid-Atlantic States" by Jasper Burns. One of the sites came with a recommendation from a couple of friends on the Fossil Forum. It is a roadcut northeast of Blackburg, VA near the village of Lusters Gate. Below is a view of the roadcut which you can see is very overgrown. 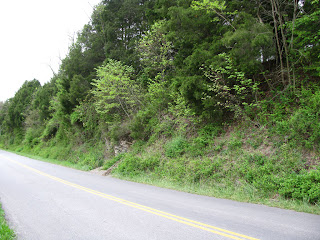 This shows the most obvious exposure of shale and also evidence of collecting by others. I spent about half a hour picking at the rocks looking for any of the trilobites that are known to be found here. 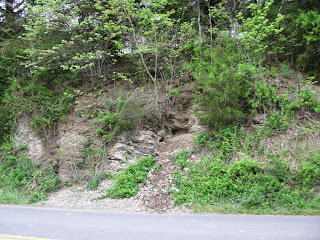 I didn't have much luck with the Trilobites but I did find some Climatograptus sp. graptolites on some of the bedding planes. Graptolites are primite animals that formed colonial structures similar to coral and bryozoan but they often floated in the currents rather than cement themselves to a substrate. They are found primarily in the lower Paleozoic but survived until the middle carboniferous. 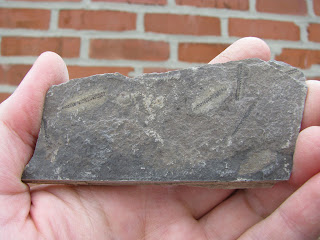 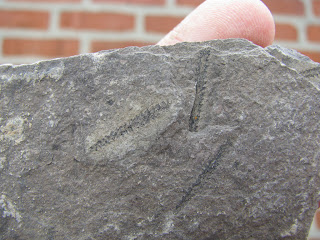 This rock is interesting in that it has a large number of the graptolite fossils but also some stringy looking traces. Perhaps they were part of a large colony that was held together by the "strings". 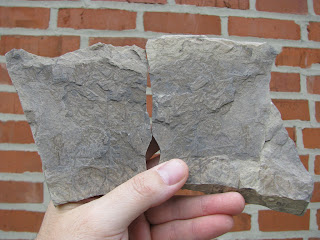 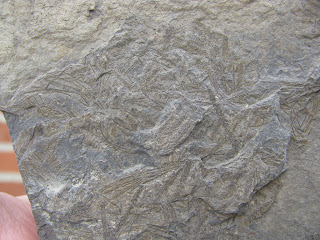 Graptolites are hemichordates which means they have a primitive tube with nerves for part of their lives. It's thought that they are a connection between vertebrates and invertebrates (more specifically echinoderms) and came from a similar common ancestor. (Wikipedia)

The above specimens came from a roadcut along Route 785 near Lusters Gate, Montgomery county, Virginia. The cut is listed as site #2 in the book "Fossil Collecting in the Mid-Atlantic States" by Jasper Burns. The Liberty Hall formation is dated to the middle Ordovician Mohawkian stage and is roughly equivalent to the Shippensburg and Chambersburg Limestones in PA. It is below the Lexington Limestone of Kentucky and is considered a part of the Black River-Trenton group in NY and Ontario.
Posted by Dave at 12:01 AM