Pennsylvania is fortunate to have some rocks that record a rich record of fish as they were starting to diversify.  There are a few well known exposures of the Catskill formation which will yield fossils of these early fishes and one of them is called Red Hill. I have been collecting at that site once as part of an organized field trip. The site is managed by local authorities and the Philadelphia Academy of Natural Sciences and limits the number of collectors who visit. The fossil below was found at the site but not by me. I purchased it as I was not lucky enough to find one for myself. It is a tooth from a fish called Hyneria lindae which was an lobe finned fish. Those were the fish that eventually went on to learn to crawl onto mudflats and became Amphibians and Reptiles.

Hyneria lindae was a good sized fish with an estimated length of 10' in larger specimens. It was a top predator in it's ecosystem and the tooth below shows you why. It is a long tooth but missing the very tip. Were it a little wider and flatter you'd think it belonged to a shark, but as it is one could almost see it in a Crocodile or Theropod dinosaurs mouth. Suffice to say, it looks like a tooth that a predator would have. 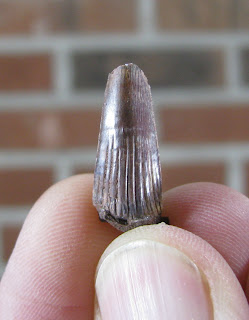 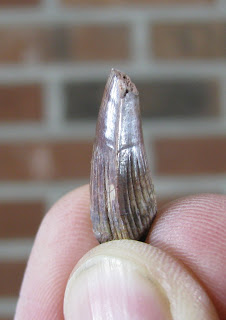 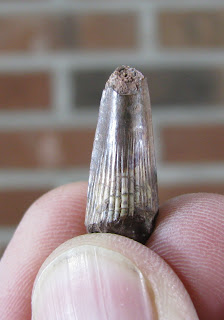 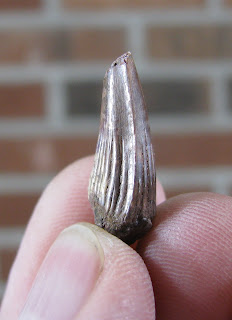 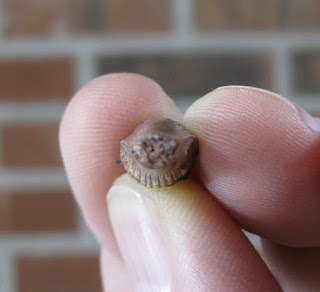 I've posted a scale from this giant fish on a previous blog post.

Here is a great page from the Philadelphia Academy of Natural Sciences that shows some of the fossils of Hyneria lindae and talks about how an artist came up with a painting of this long extinct creature.

The rocks at Red Hill are Devonian in age (upper Famennian stage) at about 360 myo and belong to the Duncannon member of the Castskill formation.
Posted by Dave at 12:01 AM