Today I have a fossil trackway to show you. This is more properly called an Ichnofossil as the body of the animal is not present. On this piece of shale are what appear to be scratch marks. I lost the original tag that came with the specimen but I recall that they were traces from swimming. An inquiry to the Fossil Forum website and the hive mind came up with Rhynchosauroides sp. as the name of the traces.  These represent a primitive reptile that was swimming in a pond or pool near a river. The creature floated in the water but it was shallow enough that it's claws grazed the sediment below and left traces. The pond may have been temporary and subject to frequent flooding as the substrate was firm enough to preserve the initial traces before they washed away, and then get buried with a new layer of sediment.   As I mentioned before, I lost the original tag but I believe this was Triassic aged and came from the rocks of the Newark Supergroup in Pennsylvania.  These rocks were originally laid down in a rift valley as the super continent Pangea was breaking up. 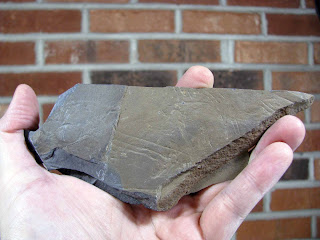 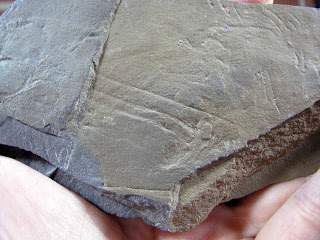 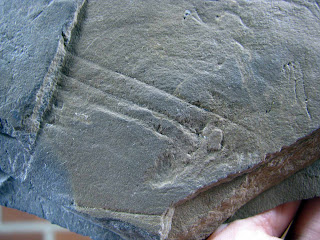