I'm told by fellow collectors that Ectenocrinus canadensis is the most common crinoid that is found in the Coburg formation. I've managed to find one or two examples but the genus is very small and easily overlooked. Below is the best example that I have found but is only a calyx with partial arms that has been squished flat. E. canadensis has a very small calyx and almost seems to be composed primarily of arms.  Ectenocrinus sp. is also very common in certain layers of the Fairview and Kope formations in Kentucky. I'll show some of those specimens in a later post. 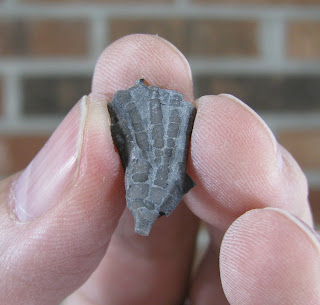 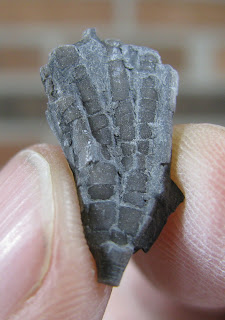 The Coburg formation is Ordovician in age (late Ordovician, Katian/Mohawkian stage).
This fossil was collected from the St. Mary's Limestone Quarry in Bowmanville, Ontario. I used William Hessin's book "South Central Ontario Fossils", 2009, Self Published, pg. 232 to help identify this fossil.
Posted by Dave at 12:01 AM