Euglyphella ostracod from the Silica Shale

There are five different species of Euglyphella ostracod found in the Silica Shale. Below is one I found in my sample from Sylvania, Ohio. 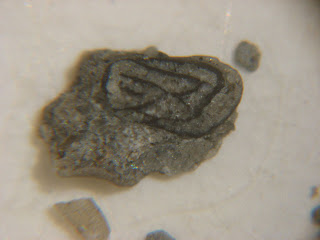 I referred to "Ostracods of the Middle Devonian Silica Formation" to see if I could figure out which one the above specimen was. It's not particularly clean and is still embedded in the matrix so that hides some of the detail. On plate 76 (pg. 355) is a comparison of all five species. After reviewing the plate I think this most closely resembles Euglyphella sigmoidalis (although there could be an arguement that it's E. projecta). I collected this from eroded residue of the Silica Shale (Devonian, Givetian stage) near Sylvania, Ohio.
Posted by Dave at 12:01 AM