As I search the eroded talus of the Irondequoit limestone Rochester Shale, I sometimes find bits and pieces of Trilobites. So far it isn't even a whole pygidium or cephalon rather it's partials that are still in matrix and have been subjected to weathering.

I think that these three pieces are partial pygidiums from Dalmanites. The first piece is the most telling with a bit of the "tail" portion that sticks off the end of the pygidium. A whole specimen from the Rochester shale can be seen here. 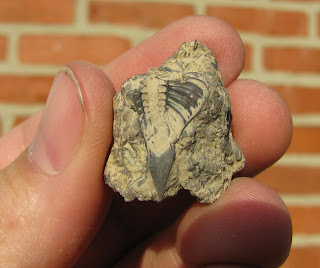 This bit is missing the tail but has the same look as that of the specimen above. 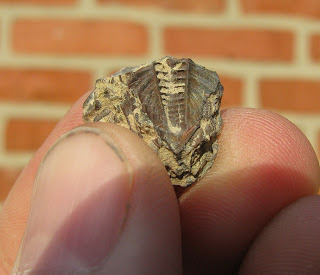 While the first two were looking at the shell from below, this is looking at it from above. Again the pattern of the central axis and the pleural lobes on each side (what remains thereof) point to it once belonging to a Dalmanites. 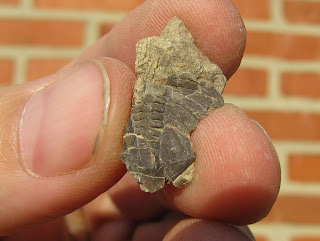 This next bit is more mysterious. It's a single segment of the thorax called a pleura. The picture below is looking at the side of the specimen. 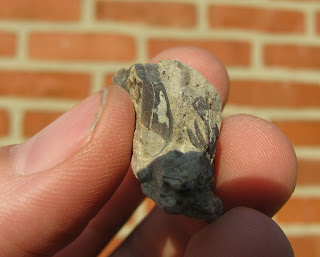 This picture is looking at the top of the specimen. Based on the known species from the Rochester shale I would guess that this could have been a part of a Bumastus or possibly a Trimerus. 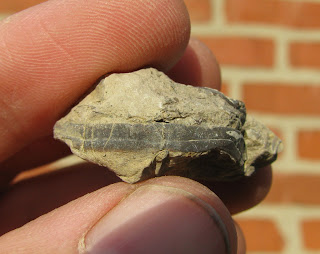 The Irondequoit limestone Rochester Shale is Silurian in age (Shienwodian stage). All the above specimens were found near Lockport, NY.
Posted by Dave at 12:01 AM