I'm heading back to Arkona, Canada soon so I plan to feature a series of fossils that I've collected before at this prolific site. I've only had a chance to visit it twice but have brought back a wealth of fossils, many of which I can't find in my local rocks.

As a refresher, Arkona is a small town in Ontario, Canada that is close to an exposure of Middle Devonian aged rocks along the Ausable river. The best exposures are along an area called the "Hungry Hollow" but what meaning that was once associated with that name has long since been forgotten. Both Arkona and Hungry Hollow lend their names to the formations that are found in the exposures along the Ausable river and so the fossils generally come from the Arkona formation or the Hungry Hollow member of the Widder formation. The fact that the Hungry Hollow was once considered a formation but has since been reduced to a member of a different formation is a point of contention among local collectors.

So to summarize, Middle Devonian (Givetian) aged rocks exposed along the Ausable river near Arkona in Ontario, Canada.

Today's specimen is Mucrospirifer arkonensis which comes from a bed within the Arkona formation. It has a very this body that is very wide and almost looks like a straight razor. 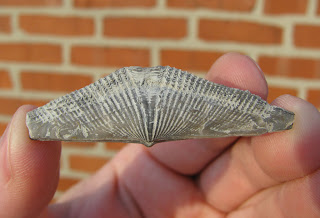 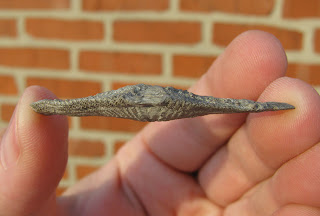 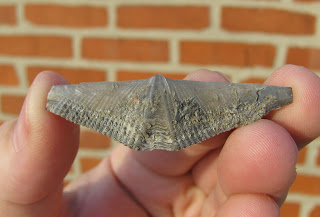 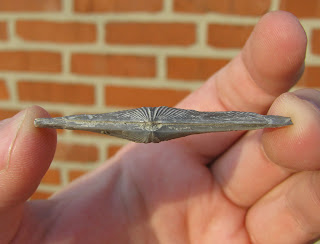 Typically I find these covering the top of a layer of fossil hash and the above specimen is the first (mostly) complete, loose shell I've collected. Below is a typical presentation which, if you are willing to haul the chunks back to your car, makes for a nice garden rock. 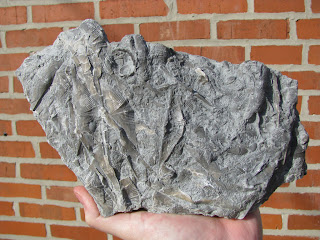 Due to the large number of remains one gets a better idea of how large some of these shells got. A couple of just single valves and you can see the interior architecture of the muscle attachment points. 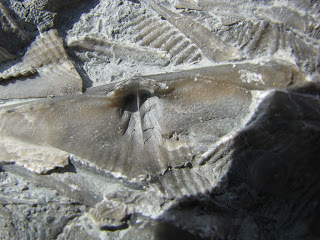 The layer looks like a storm deposit due to the jumbled remains. A side view of the layer shows that I mean. 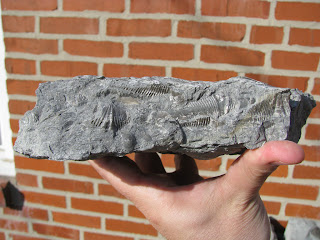 Some of the other fossils that are found in this layer are: 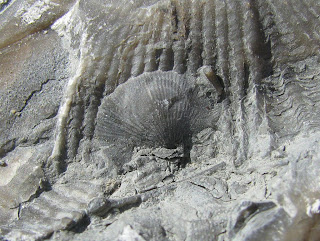 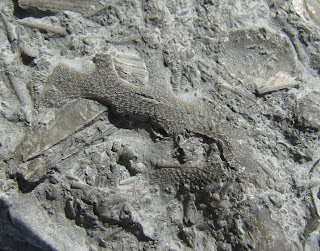 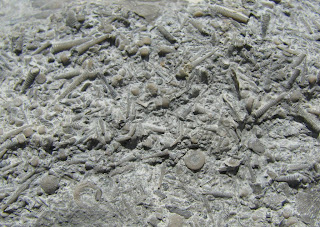