While exploring an exposure of the Upper Silurian/Lower Devonian aged Keyser formation in central Pennsylvania, I came across these chunks of rock that seem to record a mass die off. What I found are thousands of Tentaculite fossils all pointing in the same direction. 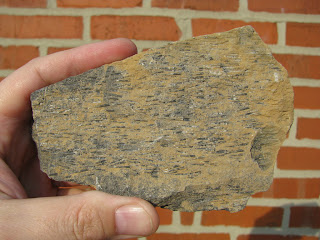 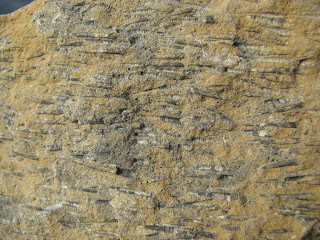 Tentaculite fossils are a mystery to Paleontology. Some think they may be worm tubes, others say they are related to jelly fish or corals. Either way, this rock has a story to tell.

Here is a side view of the above rock. The thickness of the layer is approximately 1 inch. 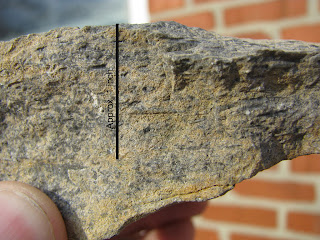 From what I can see, this is a relatively thick layer of these fossils and all of the shells are pointed in the same direction. I interpret the shell orientation as indicative of the current on the bottom of the sea floor. As the water swept over the shells it oriented them with the narrow end pointing in the direction of the current.

As to why the layer is so thick and dense is another matter. It could record a mass die off of the Tentaculites due to a red tide or some other sudden change in their environment. It could also represent years of accumulation of the shells such as at a wave base or a sheltered area.

Here is another piece of rock from the same locality. 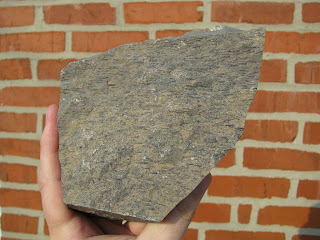 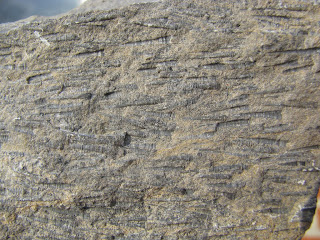 Here is the side view of the above rock. The Tentaculite layer is thinner, only a few millimeters at the very top, but you can see some nice lamination in the rest of the limestone. Alternating layers of dark and light limestone may record years or seasons. 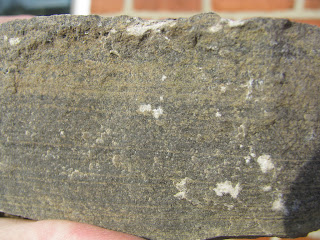 I wasn't able to locate the layer these pieces of rock came from so I don't know the full extent or thickness of the Tentaculite grave. The next time I visit the site I will try to find out more.
Posted by Dave at 12:01 AM