The Bois d'Arc formation of Oklahoma

While the majority of my vacation last fall was to Utah and Wyoming, I did a quick couple of days in Texas and Oklahoma. Texas was kind of a bonus for the visit as my primary goal was to collect in the prolifically fossiliferous exposures of lower Devonian aged rocks found around Clarita, Oklahoma. There are two main formations that are extremely productive, the Haragan formation and the Bois d'Arc formation. They are sequential formations, with the latter overlying the former conformably. The faunas of both formations are very similar with only minor differences usually seen as rare species unique to each formation. Both formations roughly correspond to the New Scotland and Kalkberg formations of New York and the trilobite fauna has affinities with that of similar aged rocks in Morocco.

On this trip I was able to arrange a visit to a large exposure of the Bois d'Arc formation on land owned and operated by Leon Theisen. I met him and his wife at the Clarita post office and they led me to their property for the fossil hunt. They are nice people to spend a day in the field with and were helpful and generous during my visit. Here are some pictures of the nearly mile long exposure I was exploring. 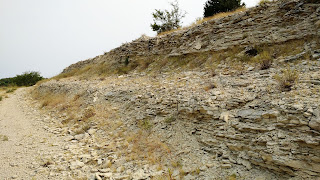 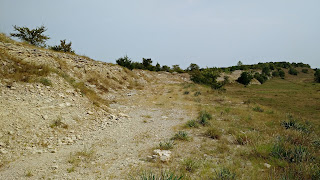 Leon owns and maintains the land and the rock exposure and also hunts for trilobite fossils which he then prepares and sells. As with any fee quarry, Leon has the right to keep any rare specimens that are found but he won't leave you with nothing. He often will make a trade with you so that you get maybe a lesser specimen or a host of more common species. I was not fortunate enough to find anything truly rare during my trip but Leon and his wife were very generous and gave me several fossils of somewhat uncommon or rare animals.

The weather was good for late August in Oklahoma, temps in the upper 70's to low 80's (24 to 30 degrees Celsius), light cloud cover and lower humidity. After a short primer on what to look for Leon turned me loose on the exposure. Finds were plentiful and came fast as the ground was littered with fossils of brachiopods, trilobites and coral. Within the first hour I'd found three complete Paciphacops trilobite fossils loose in the road gravel and a partial Cordania trilobite along with pygidiums of the larger trilobite Huntonia. 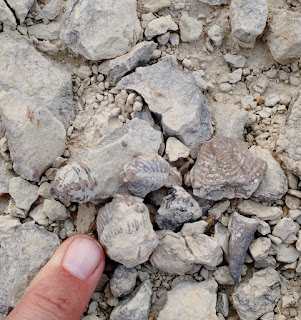 A little research informed a little more about the exposure I was collecting at. It was most likely the Cravatt member of the Bois d'Arc formation which is a marly limestone that weathers easily. Amsden and other workers feel that the rocks represent a shallow water, off shore community that was below wave base. There are no real reef building organisms present, for example algae, stromatoporoids or sponges while the corals and bryozoans that are present are generally smaller, solitary species or encrusters. The fact that there are no concentrated shell beds, or only very thin horizons, nor are there shells present that show wear, is indicative of a calm water environment that didn't have many storms rolling through. This is likely also the reason that many trilobite fossils usually are intact and represent species with many delicate spiny features. Were this a more turbulent environment those parts of the shells would be broken and scattered quickly.

There was some wildlife that I saw while collecting, but luckily none of the snakes, wild boars or tarantulas that I'd heard about.

A metalmark butterfly drinking up the salts I was sweating out. 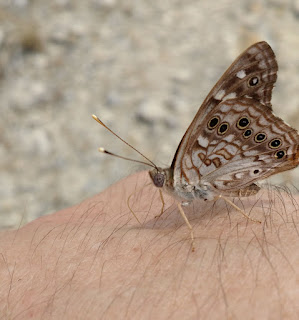 A small lizard that was staying cool under a rock. 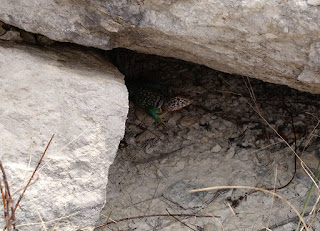 I spent most of the day at this site collecting anything I could find that piqued my interest. Brachiopod were the most abundant and diverse but I snagged a number or trilobites as well. Perhaps the best was this plate with three enrolled Paciphacops logani. 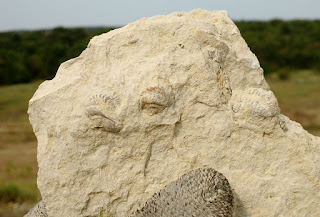 After eight hours climbing over rocks and bending to inspect potential fossils my feet, ankles, back and neck ached. Leon was quite gracious and said I could hunt for longer if I liked but I was about exhausted.  I was happy with what I had found but would have loved to take more home with me. As it was I had to limit or trim down any larger pieces of rock since I was getting on a plane the next afternoon. The weight was going to be too much for my suitcases so I opted instead to mail my finds home via USPS flat rate boxes. This worked well although the boxes were quite beat up by the time they arrived at my house.