Traces of epibonts colonizing a pelecypod from the Mahantango Fm.

One of my favorite fossils to find in the Mahantango formation are large pelecypods that have epibonts that grew on them. Sadly I don't find the casts of those fossils but rather the molds so it takes a little interpretation to figure out what you are looking at. Below is one such fossil that I recently found in Central Pennsylvania. It is the mold of one valve from a Leioptera sp. pelecypod. Decorating the mold are traces of the coral Pleurodictyum americanum and and a bryozoan called Ascodictyon fusiforme. 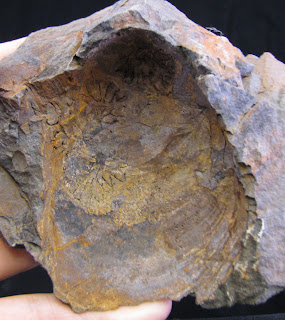 A closer view of the Pleurodictyum molds. What you see are the molds of the internal living spaces where the animal once lived. It looks like fingers because each individual corallite grew up and out from the Pelecypod shell it was attached to. The little tiny bits that run in between the larger "fingers" are infilled septal spines that the animal used to help support it's body. 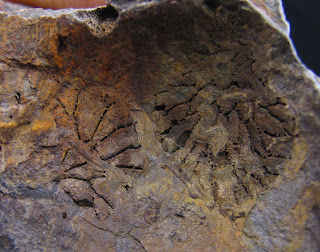 These are the traces of Ascodictyon fusiforme which was a bryozoan that formed widely scattered colonoies that sort of resembled teardrops connected by thin strings. A better example is shown in the first picture on this page from Karl Wilson's New York Paleontology web site. Since I only have the molds of their exteriors, I have to instead recognize the shape and growth pattern. 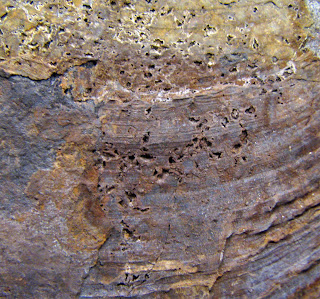 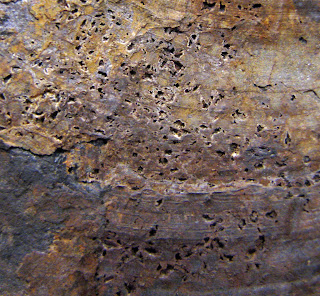 I may not find the most beautiful fossils in the Mahantango Fm. but you can still tease information out of them. The Mahantango Formation is middle Devonian (Givetian stage). I suspect the location that I found these fossils in is roughly equivalent to the upper Windom Shale of the Moscow Formation in New York.
Posted by Dave at 12:01 AM