Below is a specimen which is interesting due to the evidence of epibonts. It's a piece from an large oyster shell that was found in Delaware along the C&D canal spoil piles (Cretaceous aged sediments dredged from the canal in the 1970's). Upon and within the shell is evidence of multiple generations of the boring sponge Cliona cretacica along with some bryozoan colonies. There is even evidence that the bryozoan colony skeletons themselves may have been later victims of the sponge.

A view of the whole specimen shows the holes in the shell that are from the boring sponge and the bryozoan colonies. 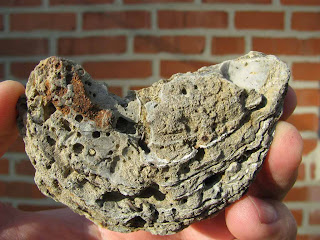 Close up of the bryozoan fossils.... 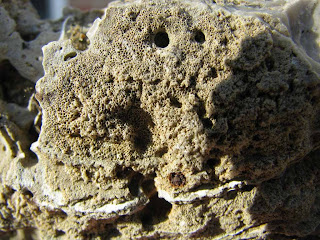 ... and the traces left by the sponge. 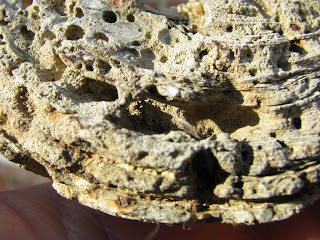 Cliona didn't parasitize or kill the Oyster who originally made the shell nor the bryozoans. It merely scraped out a home for itself within the calcareous remains and possibly utilized the calcium for it's own skeleton. Because the sponges bodies quickly fell apart after death we don't have many direct fossils of them. Instead we are left to interpret the evidence they left behind of how they impacted their environment. This is also good evidence that some oyster shells laid on the surface of the seafloor for long enough to provide a habitat for other animals.
Posted by Dave at 12:01 AM