One of the most common fossils found in the Cretaceous sediments of New Jersey and Delaware are the cigar colored and shaped guards (rostra) of Belemnitella americana. They are called guards but were actually internal supports/skeletons of the animal. B.americana belonged to a group of squid like creatures called Belemnites that have relatives in the modern cuttlefish. When they existed during the Jurassic and Cretaceous they were prolific and sometimes formed massive shoals with their skeletons. Belemnitella americana is the state fossil of Delaware.

Here is an example of a nearly complete specimen that I found. It was broken into two pieces that I glued back together. The next few pictures show the guard rotated every 90 degrees towards the camera. 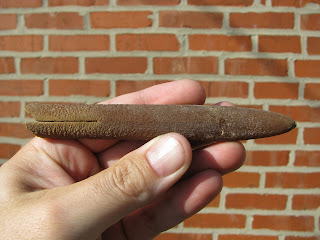 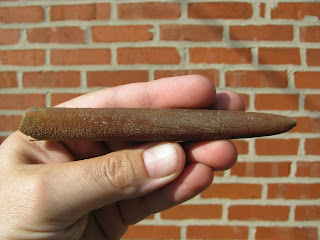 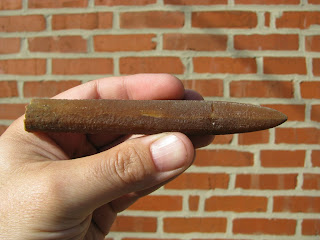 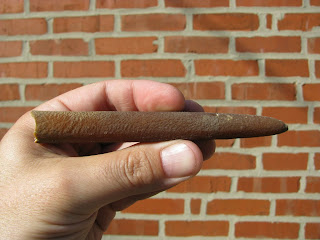 This is the very end of the rostrum and should narrow down to a tip but that is missing from this specimen. 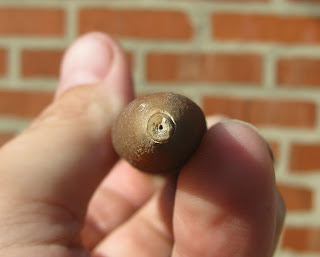 Here is a view of the living chamber where the phragmocone would have been and the internal organs of the animal were stored. 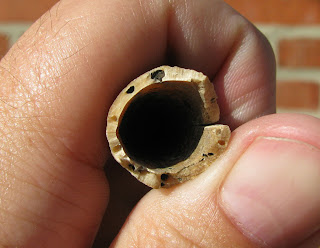 Another view to show you the depth of the chamber. 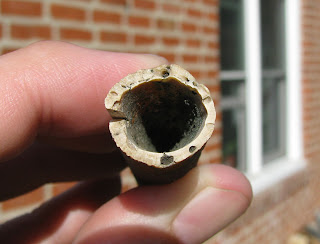 Speaking of the phragmocone, below is a specimen that retains this feature. The phragmocone was the equivalent of the ammonites curled shell. Each band represents a period of growth and if one looked carefully enough at the very tip there would be a protoconch. The guard was a skeleton that was deposited around the phragmocone rather than a shell like in ammonites. 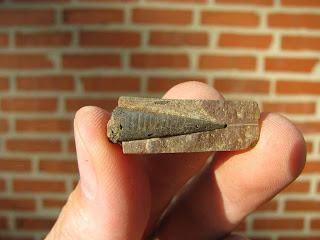 Some of the guards were left exposed on the sea floor for long enough time to be colonized by other animals. Here a bryozoan colony grew on a guard and then later had some Spirorbis worms build their homes on top of them. 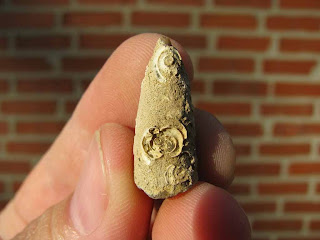 All specimens come from the Navisink and Mt. Laurel formations of New Jersey in Monmouth County, NJ. The formations record the very end of the Cretaceous in the Campanian and Maastrichtian stages.

These are the first American Belemnites I've shown with prior posts showing specimens from Poland and Sweden.
Posted by Dave at 12:01 AM