On my trips up to Canada I make a point to get up to the Brechin area and visit the Ordovician aged rock quarries. On one such trip I found the piece below which is rife with a Monoplacophoran called Archinacella patelliformis. Monoplacophorans (latin for "bearing one plate") are gastropod like mollusks which have a cap shaped shell rather than a spiral shape. They are considered very primitive and there is thought that they are representative of the original ancestor of all mollusks.

Upon a wide view one doesn't see too much but the eye is drawn to the light colored oval resting on the darker colored fossil (possibly a bit of Trilobite skeleton). 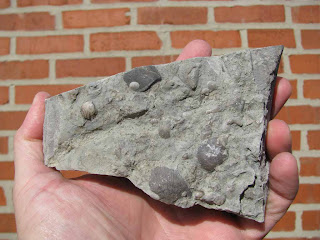 A closer view reveals that the oval is actually a shell with growth rings. 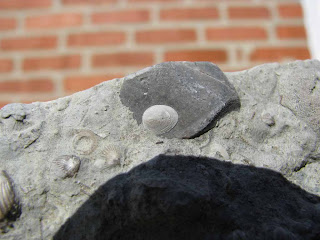 Here is another view with the light angled so you can see the shell details a bit better. 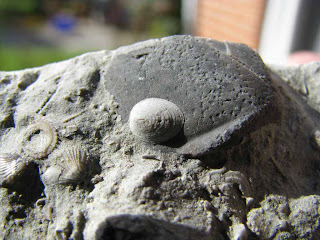 As I looked over the rock some more I found several more specimens of this unusual fossil. I think I found seven examples of varying sizes on this same piece of rock. 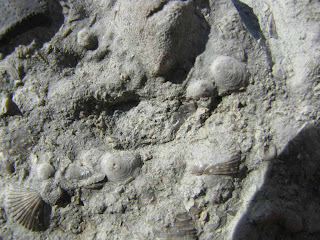 Here is another specimen that I found on a different trip. It's from a different layer as you can see from the way the limestone has weathered. Again you don't really notice it unless your looking for something that doesn't fit. I picked up this piece intitially because of the Sowerbyella brachial valve and the partial Flexicalymene cephalon. 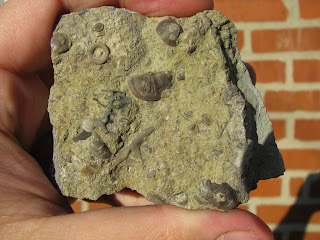 Upon closer inspection I saw the cap like shell of a Monoplacophoran. 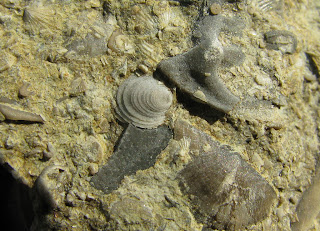 An even closer view. Note that the very top of the shell is nearly flat. 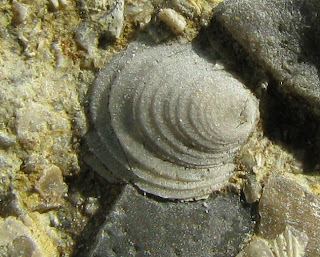 The specimens above were found in the Verulam formation which is middle Ordovician in age (Katian stage, equivalent to the lower Caradocian stage in Europe and the Mohawkian stage in the US).  I based my ID of the fossils on the book "South-Central Ontario Fossils, A Guide to the Ancient Marine Life of the Region" by William A. Hessin, 2009. Thanks to my friends Kevin and Joe for taking me to these quarries in the first place.
Posted by Dave at 12:01 AM