Recently I visited the Potomac river in Maryland to check out a river exposure of the upper Paleocene aged Aquia Formation. There are many exposures of Tertiary period sediments along the Potomac river and Chesapeake Bay but most are only accessible via watercraft. A friend from the Fossil Forum suggested a good area that I could reach on foot as I have no kayak or other boat to navigate the river.

The river was calm as was the weather with a sunny low 80's forecast for the day. 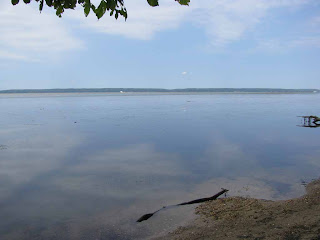 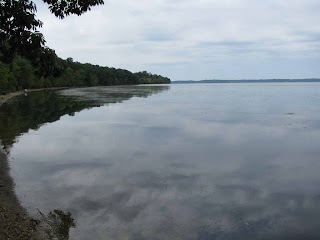 I walked along the beach stopping every now and again to closely examine the gravel along the tide line. I found my first tooth quickly: 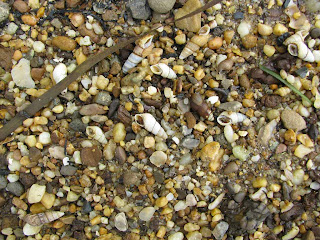 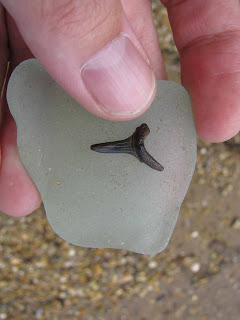 It was a small one as were several others I found as I continued down the beach dodging the fallen trees as I went. 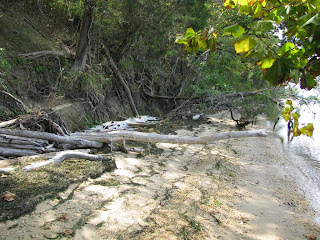 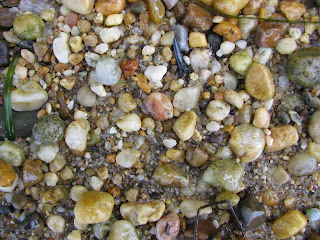 As I continued I came up to some sheer cliffs that exposed the formation and the plethora of mollusk shells contained within. You can large blocks of the cliff that have fallen and can be more easily picked over at the base. 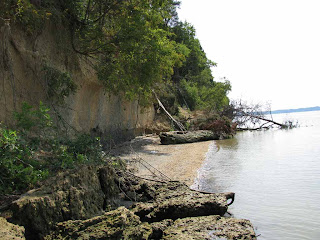 This picture shows you the strata of the cliffs with a basal unit that is full of greenish Glauconite clay and it grades (somewhat abruptly) into lighter colored sandy sediments. 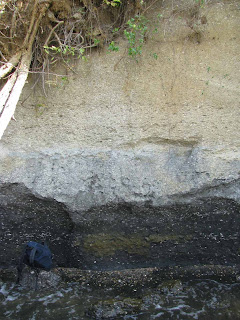 Most of the Tertiary sediments that are exposed along the east coast of the United States are generally unconsolidated (not turned to rock yet). The exceptions are limestone or coquina rock which have been cemented with calcium carbonate. At this location we have sandy marls that are full of mollusk shells. I could see cross sections of clams and Gastropods as well as some more complete shells, but they were all soft and crumbled at my touch. This was likely due to exposure to weathering which leached much of the calcium carbonate from the shells and left them friable. This is not an uncommon occurrence in unconsolidated sediments but can vary from site to site due to regional differences in weathering and original deposition. 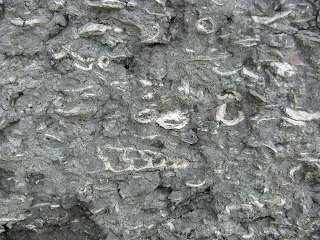 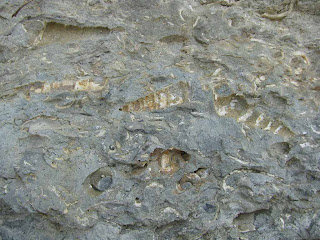 Here a Turitella sp. gastropod shell is exposed. You can see that it's very fragile and part has already broken off with the rest soon to follow. It's little to no use trying to salvage blocks of the sediment as the shells crumble whether they are wet or dry. 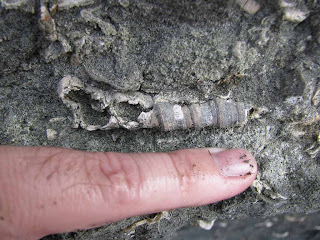 In fallen blocks of the cliff you could see horizontal sections of the sediments, but the results were similar. I did collect a few small pieces of matrix and I need to soak them in a liquid consolidator and maybe that will help preserve the delicate shells. 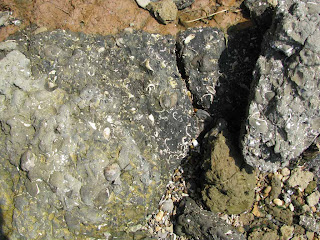 In this picture you can see some greenish oyster shells preserved in the sediment along with the gastropods and clams. Surprisingly the oysters are very solid and easily collected. 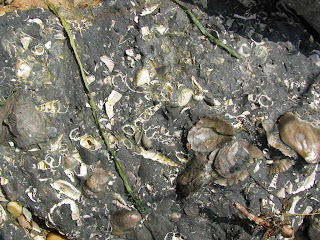 They often weather out of the cliffs intact and can be found at the base or along the tide line easily. I'll post some pictures of them and some of the other fossils I found in my next post.
Posted by Dave at 12:00 AM