As I have mentioned in previous posts, one of the benefits of trading fossils with other collectors is that you can get material that you otherwise would not be able to due to geography or expense. As part of a recent trade with my friend Gery from France, he sent me some fossils of a primitive fish from the Ukraine. It's called Cephalaspis, from the Greek words kephalikos (head) and aspis (shield), and has a flat, boomerang or arrow shaped angular head. 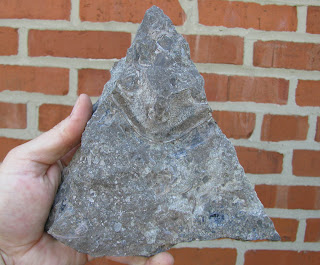 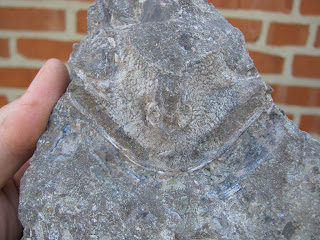 Cephalaspis was a jaw less fish that lived in the Early Devonian swamps of Europe. Another specimen that I received: 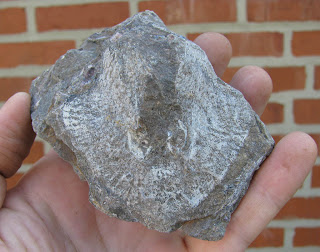 Since it had no jaw, the mouth was on the bottom of the skull. The head is angular shaped and scientists have found sensory pits along the skull edges. With this kind of arrangement I would expect this fish to have been a bottom feeder and the skull shape perhaps allowed it to dig in the soft sediments for prey. Maybe it also dug into the sediments and laid in wait since the eyes are on top of the skull.

Here is a closeup of the side of the skull where you can see some of the bone structure. 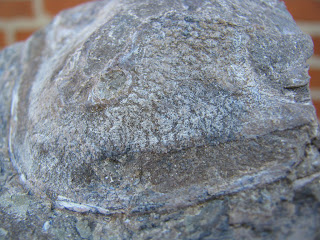 Cephalaspis was featured in the BBC/Discovery series "Walking with Monsters"

More information about this ancient fish can be found at Wikipedia

Check out all the pictures you can find for at Google Images
Posted by Dave at 12:01 AM