While exploring a new (to me) exposure of the Mahantango formation in Montour County, PA, I found an interesting fossil that I recognized. It's a holdfast from a Crinoid called Ancyrocrinus. 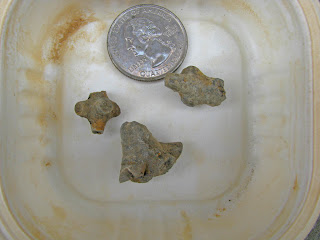 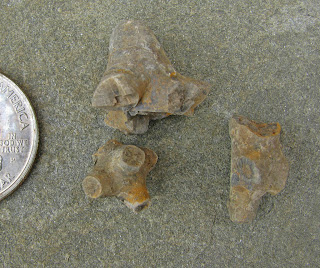 What you see in the pictures above is the base of the Crinoid stem that formed a pronged anchor that it used to hold itself in place within a coral reef. You can see that they are grappling hook shaped with four prongs which stick out at 90 degree angles from the main part. I think that there were large cirri ("roots") that projected from the sides and the animal used them to wrap around coral to hold itself in place. This maybe gave it an advantage over those Crinoids that remained rooted to the bottom in that it could unwrap it's cirri and float to another area that might have more food. I need to get back to this site to see if I can find more of these anchors and maybe more of the Crinoid itself.

According to Paleodb.org, Ancyrocrinus is known from the early Devonian (Lockhovian) of Australia and Antarctica through to the Middle Devonian (Givetian) of New York. I have seen similar anchors in other Crinoids from later in the Paleozoic so this wasn't a complete evolutionary dead end.

Want to see what a modern Crinoid looks like? Check out this blog post but keep in mind that this one doesn't have a stalk that attaches to the bottom, It's somewhat mobile by using it's Cirri as legs to grip the substrate or let go and drift in the current.

Mike over at Louisville Fossils has a post with some Ancyrocrinus holdfasts from his region.

The Deep Blue server at the University of Michigan has a very detailed report on Ancyrocrinus.
Posted by Dave at 12:01 AM