So it has been a few months since I posted anything new. It's been a busy time for me at work and this has been stressing me out so I tend not to write much. But things seem to be improving and I've been able to get a decent queue of posts lined up so you'll be seeing regular updates for the next couple of months (hopefully!). Thanks for reading and I hope you enjoy my posts.

While on vacation in Millard County, Utah this past September I had the option to collect at numerous well exposed sites all through the Confusion Range. These are a range of mountains that are just west of the more often visited House Range and the Wheeler Amphitheater (known for it's Cambrian Trilobite fauna). As my time was limited I could only visit one site and I choose Conger Springs as the geologic map showed rocks that ranged from the Devonian to Pennsylvanian periods could be exposed.

The trip to get to the site took a couple of hours with the last 10 miles on gravel roads. The gravel roads were graded well enough but, once at the springs, I heard a hissing noise as I got out of my vehicle. The noise was constant so I knew it wasn't a snake and immediately turned my ear to listen at each tire on the rental SUV I was driving. Sure enough, one of the tires had been punctured by a sharp rock. I am not ashamed to say that I briefly panicked because I was traveling alone, it was ten miles to the nearest highway, seventy miles to the nearest garage and I was in a high desert environment. My initial thought was to immediately drive back to the highway in the hopes that the punctured tire, which was not flat in any sense yet, would hold out at least until I got there and could flag someone down. This is not as good a prospect as you might think. The road I had come out on was US 6/50 which is often described as "the loneliest stretch of road in America". Driving out to the turn off to Conger Springs I had seen or passed only one other vehicle in the hour long journey. Tamping down the anxiety I felt, I then wondered if the rental vehicle had a spare. Lucky for me it did and it was a full size spare to boot! So I set about changing the tire and made sure none of the other tires had any problems. Task completed, I could now turn my attention to the main reason I had come out to this remote location, to look for fossils. Here are a couple of pictures of the area around the springs.

Looking south past an old fence. 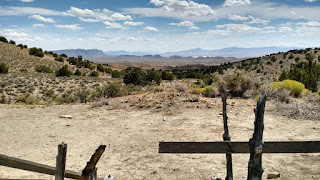 Looking north at Conger Mountain which is capped by the Pennsylvanian/Permian aged Ely formation. 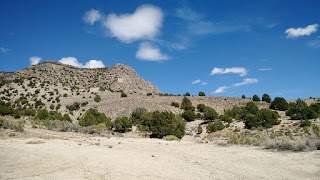 I was really hoping to find some Devonian fossils so I set out to hike to some nearby hills, that my geologic maps showed had the right age of rock. I spent a few hours wandering around the scrubby terrain looking for ANY signs of fossils but with no luck. This is often the case when trying to prospect for a new location or find an old, obscure site. I returned to my vehicle and decided, in a last attempt, to look around the immediate area as Mississippian aged fossils were supposed to be present nearby. I lucked out and found a small hillside that had a number of fairly well preserved fossils eroding out. The day was getting long and the sun starting to set in the sky so I only spent a hour or so collecting. I did not want to have to drive unfamiliar gravel roads in the dark. I managed to fill a small lunch baggie with miscellaneous brachiopod fossils and crinoid stems which was enough to call the trip a success.

Once back home in Pennsylvania, I set about to try and identify the fossils I found. The book "Geology of Millard County, Utah" by Hintze, Lehi F. and Fitzhugh, Davis D., Bulletin 133, Utah Geological Survey, 2003. and the geologic maps produced by the Utah Geological Survey indicated I had collected in the uppermost Chainman shale (actually a formation) which was lower Carboniferous in age. With that information I did some Google searches to see if anyone had written a paper that listed fossils that could be found in that rock unit. I found in the United States Geological Survey Professional Paper 1368, "Late Mississippian Gastropods of the Chainman Shale, West-Central Utah", Gordon, MacKenzie, Jr. and Yochelson, Ellis L.,  1987, this paragraph which was extremely helpful:


The upper beds of the Chainman Shale are exposed in the vicinity of Conger Spring in the NE V4 NW lk sec. 2, T. 19 S., R. 17 W. Brachiopods of these beds are those of the Rhipidomella nevadensis Zone, the uppermost brachiopod zone in the Chainman, particularly that part of the zone in which the productoid Carlinia phillipsi (Norwood and Pratten) also occurs. A small area of hillslope about 1,000 feet (305 m) south by east from the spring has provided a large collection of brachiopods (USGS colln. 17021-PC). A partial section measured by Gordon in June 1959, shows that a fauna is weathering from 14 feet (4.3 m) of greenish-gray shale, the top of which is 22 feet (6.7 m) below the base of the Ely Limestone.

Armed with this info I did more searches for the "Rhipidomella nevadensis" zone in the hopes I could find a list of the fauna typical of that zone. Unfortunately I found nothing specific but several other publications did give me clues. The reports "Brachiopoda of the Amsden Formation (Mississippian and Pennsylvanian) of Wyoming.", MacKenzie Gordon, Jr., 1975 and "Mississippian Stratigraphy of the Diamond Peak Area, Eureka County, Nevada",  MacKenzie Gordon, Jr., 1971 were helpful as they either provided lists of fauna found in equivalent strata or had detailed descriptions and plates to which I could compare my finds.

In fact, I did find an articulated fossil brachiopod which does indeed look like a Rhipidomella species that I think may be Rhipidomella nevadensis. 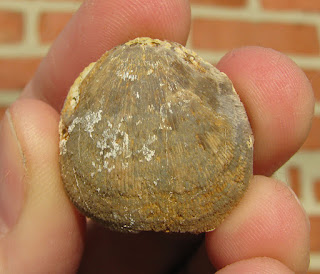 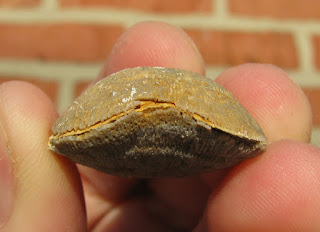 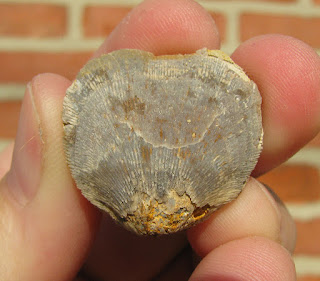 Posterior (sadly much of the posterior shell is missing from this specimen, lost to weathering) 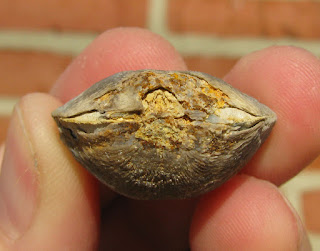 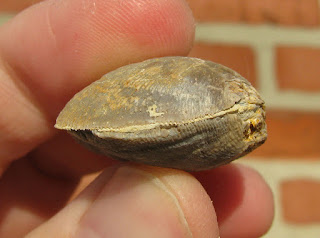 Over the next few weeks I'll be posting more of the fauna I found in the Chainman formation. Should anyone have more experience and knowledge about this locality or the fossils please contact me.