Here is a fossil from the Centerfield member of the Ludlowville formation (Devonian, Givetian stage) with an interesting Aulopora growth pattern. It's a section of a rugose coral (possibly Eridophyllum sp.), herein referred to as "substrate", that was colonized by an Aulopora polyp. The Aulopora wraps around the substrate in one predominant direction which indicates to me that it was adapting to the substrate turning as the results of currents or storms.

Here is the presumptive "bottom of the specimen. You can see that initially the Aulopora coral appears to grow in several directions. Whether it was because the substrate it was growing on was not big enough to sustain the multidirectional growth, or the substrate was rolled by currents/storms, the main cluster of corallites continued in only one direction. 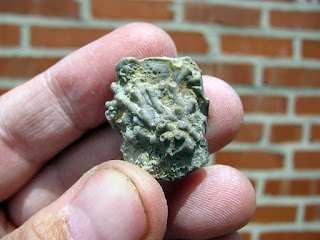 This photo show the specimen turned approximately 90 degrees to the right. 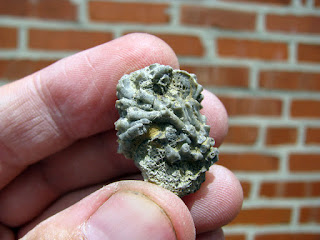 A further 90 turn shows the final growth of the Aulopora coral with many corallites overlapping one another in their attempts to reach the current in order to catch food particles. 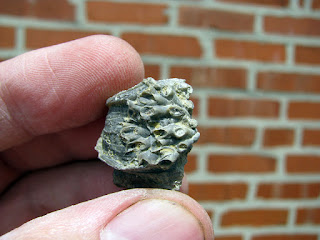 This specimen looks to me to have a colony of Aulopora that survived and adapted when the substrate it was attached to rolled. The seemingly unidirectional growth and crowded final growth stage shows that the environment it lived in was dynamic and the coral could respond to minor changes to it's orientation.
Posted by Dave at 12:01 AM