Goniatites from the upper Devonian of New York

On a recent trip up to the Buffalo area I chanced across a recent fall along the Lake Erie cliffs. It was rock from the upper Devonian layers that lie above the Moscow formation. The geology is well documented in this area but when you have a random jumble of rock at the base of a cliff it becomes a little more difficult to figure out. As I was exploring the rock fall I found a number of good examples of Goniatites. 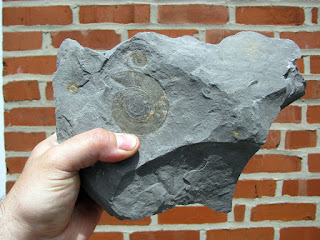 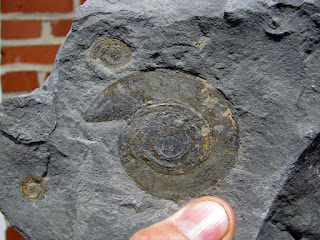 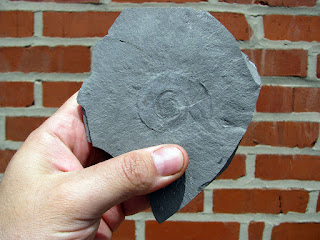 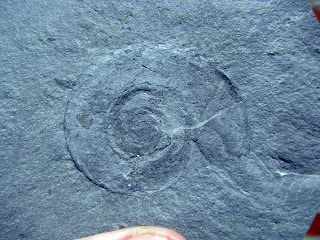 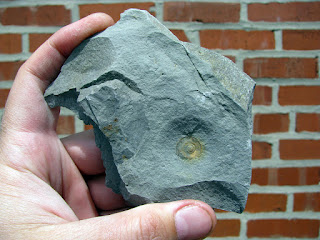 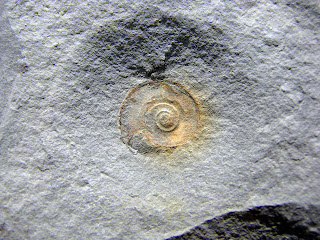 Sadly they are not detailed enough to determine species but I did find this passage while reading "Geology and Paleontology of Eighteen Mile Creek", by A.W.Grabau, Buffalo Society of Natural Sciences, Pg. 7,8


The Gray Naples Shales (Cashaqua shales).-These shales are greenish gray in color, much less fissile than the preceding, and prone to weather into a tenacious clay..... The upper fifteen feet of these shales, while rich in concretions, seem to be very poor in organic remains, no fossils having been noted in them. ... (the beds) forming a prominent band in the main section, is a layer of calcareous concretions, or better a concretionary bed of impure limestone, eight inches in thickness. This probably corresponds to J. M. Clarke's "Goniatite concretionary layer, " in as much as specimens of Goniatites are of common occurrence in it, usually forming the nucleus of the concretion. Several species of Goniatites occur, but they are seldom found in a good state of preservation. They are commonly found in a very much compressed condition, frequently perfectly flattened, and from having been replaced by iron pyrites which subsequently oxidized, much, if not all of the structure is obliterated. The external form and amount of involution therefore become the only characters by which to identify the species, and this, at best, can be but an unsatisfactory identification. In a few cases, in the specimens collected, the septal sutures are shown, allowing a more precise determination. The most abundant and characteristic species of Goniatites in these concretions are Goniatites intumescens (Beyr.) and G.lutheri (Clarke). The non-umbilicated species are rare, a single doubtful specimen having been noted.

Previously I'd thought these to be Gastropods but after reading that passage I am convinced these are Cephalopods. The Cashaqua shale's position in the cliff is above the Moscow formation and so is likely dated to the Fransian stage of the Devonian.