One of the surprise finds for me on a recent trip to Arkona are these Productella spinulicosta brachiopods. You can see small pin like protrusions that line the surface of the shell which used to have longer spines extending from them. Spines are very delicate and often don't survive long enough to be buried still attached unless done so quickly. 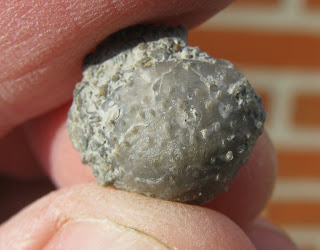 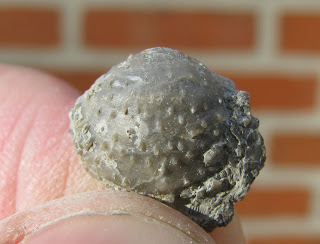 The shell below looks like it received some damage but was able to repair it. It could also be indicative of a hitchhiker that maybe settled on the surface but the rest of the shell grew around it. 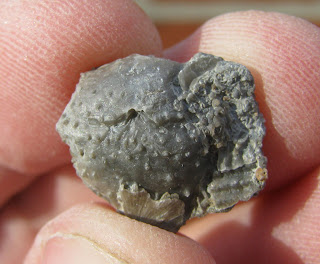 Productella belonged to the order Productida which is part of the Strophomenata class of brachiopods. Basically it means it has a similar shell structure to Strophomenid brachiopods like Strophodonta, Leptaena and Devonochonetes. What differs it are the spines that are present on the surface of it's shell. These were collected from the Arkona formation and located among the eroded remains of Mucrospirifer arkonensis hash lenses.
Posted by Dave at 12:01 AM