In a coral reef you find many different species commingling with each other. As space is often at a premium it's not uncommon for some animals to use whatever they can find as an attachment point. This specimen of coral is a good example. It's a piece of the tabulate coral Alveolites (possibly Cladopora). *Edit - I've since found out from my friend Joe K. that the coral is named Platyaxum frondosum. Thanks Joe!* 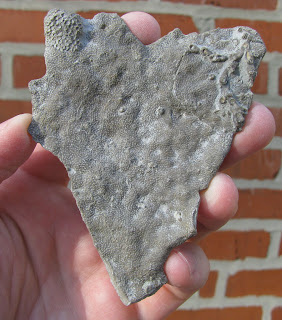 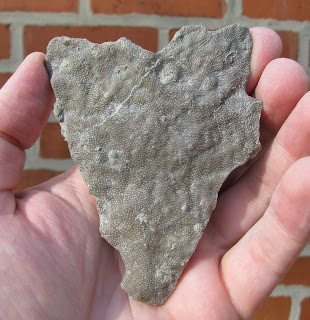 As you can see it grew as a flat fan shaped colony likely facing the current to better allow the many occupants to catch their food. At some point the fan got knocked over and landed flat on it's back. Either the event itself killed the coral or it was dead prior to it as there is no evidence of growth in a new direction after being repositioned. I know it was repositioned thanks to the many animals which used it as the base for their own home construction projects.

Here are some Aulopora corals forming their typical chain shaped growths and on the right hand side is a worm tube (Cornulites?). 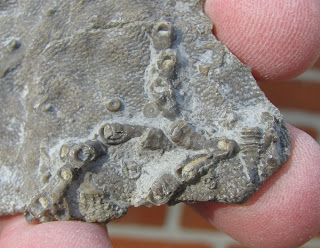 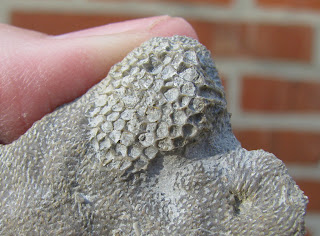 And this is another worm tube that is called Spirorbis. 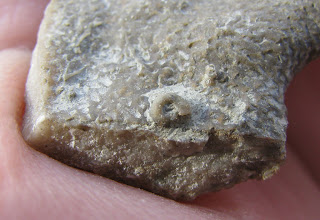 The thing to note is that all of these secondary colonists are oriented in a similar fashion which indicates the position of the original coral skeleton they are growing on. As you can see in the second posted photo the back of the specimen has no such piggybackers which is another good indication that the piece likely never was flipped over. Once the coral was laying on the sediment it could have been covered with silt or debris which would have also smothered the secondary occupants. This specimen came from the Hungry Hollow member of the Widder Formation near Arkona, Ontario.
Posted by Dave at 12:01 AM