While exploring the fossils that are eroded out of the Widder and Arkona formations I came across an odd looking bryozoan. It was not flat or round or fenestrate like most that I find there, instead it was three sided. I'd seen similar fossils before from the Pennsylvanian of Texas/Oklahoma in a genera called Prisimopora so I knew this wasn't an weird growth pattern or random occurrence. 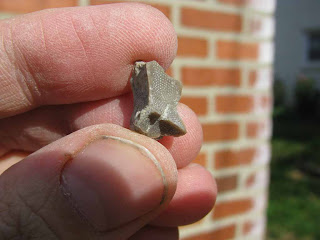 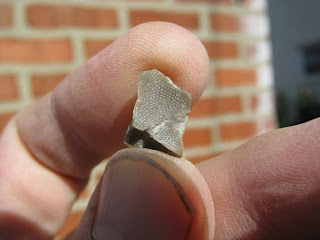 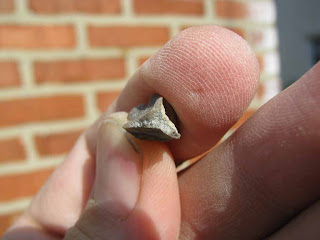 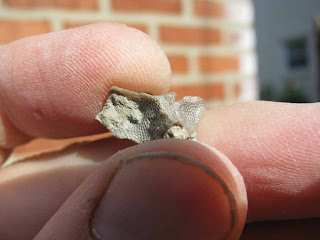 This is the only piece that I have found of this genera so far and I don't know which formation it came from as it was at the bottom of a slope. Based on the "Check List of Fossil Invertebrates Described from the Middle Devonian Rocks of the Thedford-Arkona Region of Southwestern Ontario, STUMM, E.C., and WRIGHT, J.D. 1958. Contrib. Mus. Paleontol., Univ. Mich., Vol. 14, No. 7, pp. 81-132." There are three species found within the Arkona formation (S. approximata, S. canadensis, S. separata) but none in the Widder formation. Without close examination of this one specimen or the discovery of more I can't say for sure which species mine represents.
Posted by Dave at 12:01 AM