Philhedra from the Silica Shale

Another common inarticulate Brachiopod is Philhedra. This brachiopod is identified by the flat cone shaped shell with fine radiating ribs from the central peak. 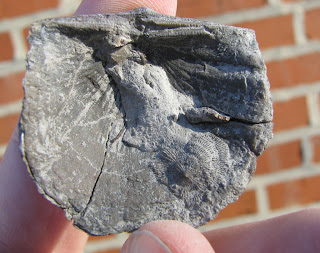 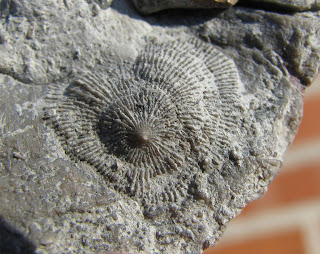 The presence of these epibont fauna Brachiopods lets you know that the bottom of the sea floor was not always turbulent. Were it so then the host shells on which they lived would be constantly flipped over and possibly smother the parasites. Another inference is that the host shells were exposed for some time, years possibly, before burial during a storm event. Good evidence for the Catastrophism point of view which states that the fossil record records short, dramatic events rather than a gradual constant progression (otherwise known as Uniformitarianism).
Posted by Dave at 12:01 AM